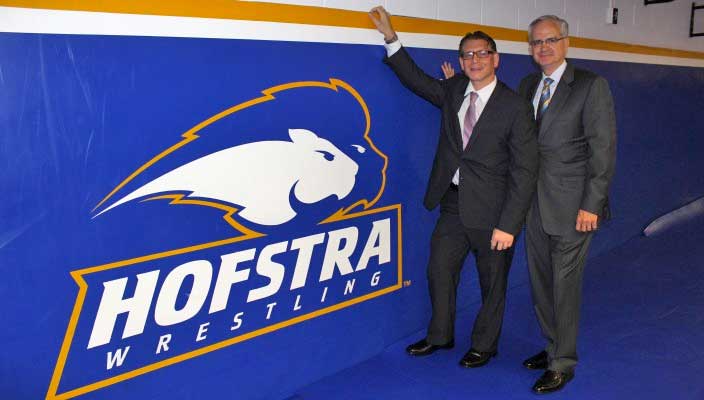 Dennis Papadatos, a two-time NCAA Division I NCAA National Championship qualifier for the Pride, has been named the 12th head coach in the history of the Hofstra University Wrestling program. The announcement was made by Vice President and Director of Athletics Jeffrey A. Hathaway.

“This is an exciting time for the Hofstra Wrestling program,” stated Hathaway. “From my initial meeting with Dennis I could see the tremendous passion he has for Hofstra University and our wrestling program. Hofstra Wrestling has experienced great success in its history and Dennis has played a role in that both as a student-athlete and as a staff member. His belief in developing well-rounded student-athletes who succeed in the classroom, on the mat and in the community made him the perfect choice to lead our program. Dennis’ tireless efforts have enhanced every program that he has worked with during his journey resulting in him becoming our new head coach. Dennis is a native Long Islander who understands what it will take to be successful at Hofstra on a local, regional and national level. On behalf of the entire Hofstra University community I am thrilled to welcome Dennis, Angela and their three children to our family.”

“I would like to thank Hofstra President Stuart Rabinowitz and Vice President and Director of Athletics Jeff Hathaway for their trust in me to lead my alma mater and this outstanding wrestling program,” commented Papadatos. “Words cannot describe my emotions and my passion for this University. It is home in so many ways and I feel blessed to be a part of it again. I want the Hofstra faithful to know that I will work relentlessly to have this program succeed at the highest level in every aspect and our student-athletes will strive for greatness in everything they do, both on the mat and in the classroom. We will focus and work on building great individuals, who will be fantastic role models, citizens and alumni. I am thankful for my support network that has made this possible, and I am so excited that I can bring my wife and kids home! Go Pride!”

Papadatos was a four-year starter at Hofstra under then-head coach Tom Ryan from 1997-2001 and recorded 95 career victories. At 157 pounds, he qualified for the NCAA Championships in 1999-00 after earning a New York State championship and a second-place finish in the ECWA Championships. He returned to nationals as a senior in 2000-01 after winning the ECWA title with three straight victories.

Papadatos has served an assistant coach with three well-respected Division I wrestling programs, including the previous two seasons at North Carolina under head coach C.D. Mock. At Chapel Hill Papadatos served as the recruiting coordinator, where he helped the Tar Heels post a top-10 recruiting class for 2014 following a top-20 ranked class in 2013. As a key member of Mock’s staff in running practices, he helped work with the upper weight classes and was part of a coaching unit that saw nine North Carolina wresters qualify for the NCAA Championships. Under his tutelage, North Carolina earned its first All-America selection in eight seasons when Evan Henderson earned the spot at 141 pounds in 2013. Henderson would follow that up with another All-America selection in 2014, becoming UNC’s first two-time All-American since 2005 and also the highest finisher in nearly two decades as he finished in fourth place.

The Tar Heels had success in the classroom as well as Alex Utley earned NWCA All-Academic Team honors in both 2012-13 and 2013-14, while also being a member of the Atlantic Coast Conference All-Academic Team.

Off the mat, Papadatos was responsible for the program’s budget, travel logistics, compliance and the student-athletes’ academic progress.

He also helped coach Tar Heels to a 21st-place team finish in 2013, which was the program’s best showing since 1996.

Before coming to North Carolina, Papadatos spent five years as an assistant at Binghamton from 2006-11 and helped produce 16 NCAA individual qualifiers and the first four All-America selections in school history. Binghamton saw six wrestlers make it to the NCAA Championships in each of his final two seasons, culminating with a 21st-place national finish in 2010. In the classroom, Papadatos helped Binghamton improve its academic progress rate (APR) score over a four-year period and helped recruit a 2008 class that was ranked in the top-25. He was also part of a staff that led the Bearcats to their first and only Colonial Athletic Association (CAA) title in 2010.

Papadatos earned his first assistant wrestling coach position at Northern Illinois, where he helped coach four NCAA Championship qualifiers and Josh Wooton to a Mid-American Conference (MAC) championship at 141 pounds. He assisted in recruiting and arranged the team’s travel and scheduling logistics.

Papadatos started his collegiate coaching career as a strength and conditioning assistant at Hofstra from 2001-04 following his graduation. As a certified personal trainer, Papadatos structured team and individual lifts and conditioning programs. Hofstra won the Colonial Athletic Association title in all three of his seasons.

As a wrestler, Papadatos was named to the ECWA All-Freshman team in 1998 and was a three-time NWCA Academic All-America. He graduated from Hofstra in 2000 with a degree in exercise physiology and completed a master’s in health education from Hofstra in 2002.

WHAT THEY ARE SAYING ABOUT DENNIS PAPADATOS…

Tom Ryan, Head Wrestling Coach at Ohio State (Hofstra Wrestling Coach from 1995-2006)
Hofstra is a place where I was nurtured and grew as a coach. I have tremendous pride and many great memories at Hofstra. President Shuart remains a friend as does the leader of the athletic department Jeff Hathaway. I am proud of the decision Hofstra made in the hiring of Dennis Papadatos. Dennis is the perfect hire as the Head Wrestling Coach. He was a tremendous example as a student-athlete. His past speaks volumes about the passion and energy he will bring to Hofstra wrestling. I’m excited about the future of the program. Dennis will continue to move the program forward.

Noel Thompson, Teammate of Papadatos at Hofstra from 1999-01 and current CEO and Chief Investment Officer of Thompson Global LLC.
Dennis has always had tremendous passion for wrestling and he’ll bring that enthusiasm with him as he returns to Hofstra. Even when we were teammates, he was always a student of the sport. He was very proficient technically and his continued focus on technique has made him a great coach. He’s going to put Hofstra in position to have great success as a program.

Nick Gallo, Former Hofstra Wrestler and 1977 National Champion at 126-pound weight class
Dennis is a great choice to take Hofstra Wrestling to another level. He has shown great leadership in his previous coaching stops and has incredible passion for both Hofstra and the sport of wrestling. With all the exciting events for Hofstra Wrestling in the future, especially being the host of the upcoming 2016 NCAA National Championships at Madison Square Garden, we are all looking forward to seeing the program’s future. I am sure Dennis will steer us in the right direction.

Neil Duncan, Two-time NCAA qualifier for Hofstra from 1971-72
Dennis is an outstanding hire as Hofstra’s new head wrestling coach. He’s a proven top-notch recruiter. As a well-known and respected former Hofstra wrestler, Dennis relates well to the local wrestling community. He has a tireless work ethic and great passion for the sport, which is apparent as soon as you meet him.

C.D. Mock, Head Wrestling Coach at North Carolina
It has been a great pleasure having Dennis on staff with the Tar Heel family the past few years. Dennis was a big part of our program and certainly instrumental in the positive changes we’ve experienced during that time. He is the right person to lead the Hofstra program and I have no doubt about his prospects for success. Dennis and his family will always be a part of our family and we wish him much success and happiness.

Pat Popolizio, Head Wrestling Coach North Carolina State (was head coach at Binghamton with Papadatos on his staff)
I had the honor to work with Dennis first hand during my time at Binghamton University. Dennis was a vital part of the success we had at BU and he will bring a work ethic that is unparalleled to Hofstra. He has all the knowledge and experience to build and brand a national powerhouse and Dennis will bring an exciting attitude and personality to the college ranks. Hofstra has a rich history of wrestling and I am confident Dennis will continue to build upon that. He is the perfect coach, mentor and leader for the Hofstra Pride.

Jim Norris, Retired Athletic Director/Binghamton University
Dennis Papadatos is one of the finest teacher-coaches that I have ever been associated with and he will do a super job as the Head Wrestling Coach at Hofstra University. Dennis is a first-class person with great integrity and he will continue to be a tremendous role model for young people. His work ethic, inexhaustible energy level, and positive enthusiasm are all second to none. Without a doubt, Dennis Papadatos will build a wrestling program that everybody associated with Hofstra University will be extremely proud of and he will do it the right way.

Mike Moyer, Executive Director of National Wrestling Coaches Association
Dennis is a terrific hire for Hofstra University. He is fully committed to an educationally based coaching philosophy. Dennis is absolutely tremendous and I know that Hofstra is home for him. He is one of the bright shining stars in our coaching community and Hofstra Wrestling is in good hands with Dennis at the helm. Dennis’ ongoing commitment to pursue professional development on multiple occasions in our CEO Leadership Academy clearly separates him from many others. Coaching development is an important aspect of his maturation as a coach and we couldn’t be happier for Dennis and his family.

Pat Tocci, Senior Director of National Wrestling Coaches Association
Hofstra University is getting an outstanding coach in Dennis. He is extremely committed and a tireless worker who understands the necessities both on and off the mat it requires to build a successful program. I have no doubt he will continue to build on the rich history of Hofstra Wrestling.

Scott Casber, Co-Founder/Host Takedown Wrestling Media
Dennis has been a fixture in college wrestling and he’s a tremendous recruiter and outstanding coach. He expects nothing but the best from his student-athletes. Hofstra has made a good hire and he’ll be an incredible asset to the athletic department.