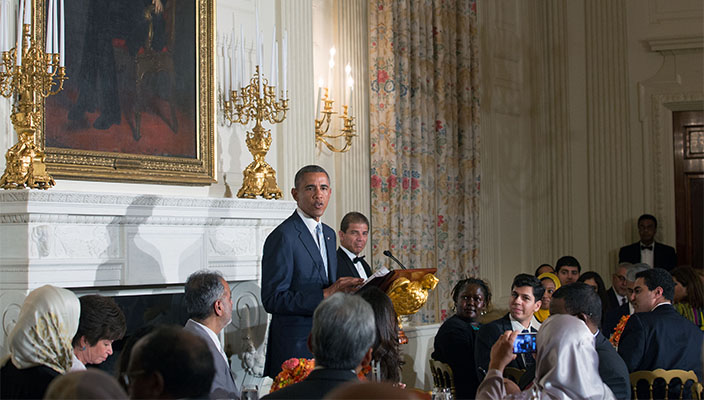 Dinner at the White House? Check.

As if his collegiate resume were not already stellar, Bassir Caravan ’15 attended the Iftar dinner celebrating Ramadan at the White House this month, and was seated at President Obama’s table.

“It was very surreal,” Caravan, a physics major, said of being seated just two spots from President Obama at the July 14 event. “I had to double-check that [my place card] said ‘Mr. Caravan.’” Most of the guests at the dinner were diplomats, ambassadors and prominent Muslim-Americans in Washington, D.C. But the President’s table comprised non-diplomats, including students and community leaders, Caravan said.

This year’s Iftar dinner was the sixth that President Obama has hosted since taking office. The tradition, which represents the breaking of the fast in the Islamic holy month of Ramadan, began with President Clinton and was continued by President George W. Bush.

Caravan, an Afghan-American who resides in Malverne with his parents and four younger sisters, caught the attention of the White House with a candid letter he sent to the President in 2012. “I’ve always admired the President and all that he has done as President—especially reparations of relations with the Middle East,” he said.

In his letter, Caravan expressed his gratitude and chronicled his family’s story: from his parents’ early hardships after immigrating to the United States to their realizing their American Dream and raising five children in New York. “It is this great country that has accepted me and my family as its own and counted us as equals so that we may freely pursue our dearest passions and dreams,” he wrote.

Discussion around the table during the hour-long dinner centered on sectarian violence in the Middle East and the future of biotechnology and genetics research, Caravan said.

The President also “asked us all what we ‘were up to’ and engaged us individually before asking us about being Muslim-Americans,” he said. “The President showed that he had knowledge of my letter, he knew my name, and showed great familiarity with everyone who he sat with.”

The dinner conversation also included a little election humor. Caravan shared with President Obama his work with his research mentor, Hofstra Physics Professor Dr. Gregory Levine, on presidential election modeling and the relative value of electoral votes in different swing states. The President quipped: “ ‘Yeah, I didn’t rely on the polls, I was just checking your stuff,’ ” Caravan said.

Interestingly, the Iftar dinner was not Caravan’s first visit to the White House. He participated in a Pashtun-American roundtable discussion last year.

When he’s not at the White House, Caravan continues to make his mark on campus. In addition to his collaboration with Dr. Levine on electoral math, he is working with the professor on two other research projects – one involving another student about quantum charge fluctuations in disordered systems and a second about quantum field theory and gravity.

As busy as he is, Caravan also works as a peer tutor. He plans to attend medical school after graduation.

“I have always had a feeling that Bassir might be able to change the world,” Dr. Levine said.

Featured image: Caravan, seated to the right of the podium, looks on as President Obama delivers his opening remarks. (Official White House photo by Amanda Lucidon)