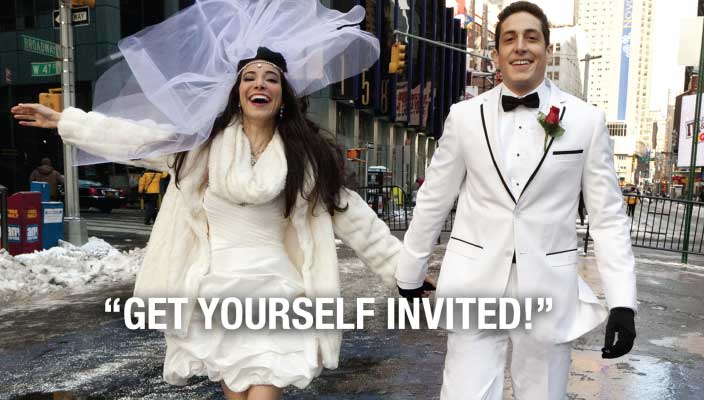 Tony n’ Tina’s Wedding, the smash interactive theater show, has returned to New York City for a 25th anniversary off-Broadway revival. The improv-style comedy, known for its use of warm, exaggerated stereotypes of Italian-Americans, is based on characters created by Hofstra drama alums Mark Nassar (’81) and Nancy Cassaro (’81).

The first commercial production of Tony n’ Tina’s Wedding took place in February 1988, and the show would go on to run for 10 years in Greenwich Village before moving to Times Square, where it ran for another decade. There were also productions in cities around the country, including Atlantic City, Chicago, Dallas and Denver, as well as performances in Japan, Australia and many European cities.

The revival brings the party back to Midtown for its two-part event: a traditional wedding ceremony held at Chapel at Jacqueline Kennedy Onassis High School (formerly the location of Performing Arts High School), followed by a reception at Guy’s American Kitchen & Bar on West 44th Street, to which the bridal party escorts family and friends through the heart of Times Square and Shubert Alley.

“The whole idea of the show was really born at Hofstra, with Hofstra students,” said the revival’s producer Joe Corcoran (’82), who produced the commercial production in 1988. He also played one of Tony’s groomsmen in a few of the original performances. “A lot of the creators were from Hofstra.”

Indeed, some recognizable names were part of the first weddings of Tony and Tina back in the day, including Elizabeth Dennehy (’82), Judy Sheehan (’82), Moira Wilson (’81), Monica Horan (’84) and Phil Rosenthal (’81), creator of Everybody Loves Raymond. And Hofstra continues to be an important part of the Tony n’ Tina legacy: The current revival features Jon Kayser (’81-’82) as a marketing director, Rob Basso (’94) as an associate producer, and Hillary Needle (’89) as a corporate consultant, among other grads.

“When Joe reached out to me to join the Tony n’ Tina team, I was so excited to collaborate with him,” said Needle, who met Corcoran a few years back while she was serving as the event planner for fellow alum Basso’s book launch party for The Everyday Entrepreneur (Wiley, 2011), in which Corcoran was featured. “It’s even more special knowing that so many Hofstra alumni are part of the infrastructure of this iconic show,” Needle said.

More than 500 people auditioned for the 25 roles of the current production, including actor Joe Ferraro, son of Hofstra alumnus Joe Ferraro Sr. (’81), who plays the lead role of Tony. A year ago, Ferraro, 25, of Smithtown, N.Y., met Corcoran for a casual lunch with no intentions of discussing the revival, which was in its infancy stage. But the two hit it off. Corcoran later asked Ferraro to perform in regional productions of Tony n’ Tina’s Wedding, and it was during those performances that Ferraro met Tony Lauria, who is directing the Times Square production.

“My father has always been a huge supporter of anything I do, and without him, I would have never met Joe,” Ferraro said. “The friendships he built at Hofstra 37 years ago are still strong to this day.”

The revival  of Tony n’ Tina’s Wedding will rely mostly on the successful formula the show was built upon, while taking full advantage of the latest advances in technology, particularly social media, that were not around when the show was conceived.

“Social media serves our genre better than any other kind of show,” Corcoran said. “When people come to our show, we’re going ask them to turn their phones on, not off. We’ll encourage them to share their photos and their experiences with their friends before, during and after the show.

“Last time, we ran for 20 years,” Corcoran added. “With this revival, I’m hoping we can do the same.”