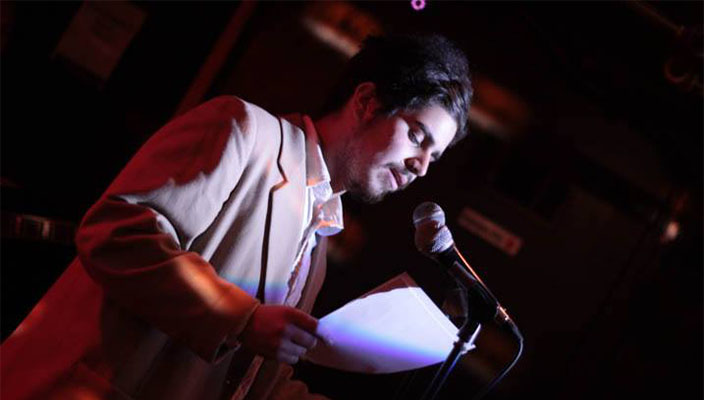 For Philip Santos Schaffer ’13, all the world really is a stage. The drama program grad continues his run in The Living Theatre’s No Place to Hide, but the production has moved from New York’s Clemente Soto Velez Cultural and Educational Center to performance spaces in the city’s parks. Additionally, Schaffer’s The Life of the Theatre, an original script he completed while at Hofstra, will open for No Place to Hide on select dates.

Hofstra alumni Maximillian Baudisch, Stefanie Harris, Peter Previte, Matt Engle and Cassie DeMarco will perform in Life, which opens for No Place to Hide on Friday, July 11 and 18 in High Line Park and on Saturday, July 12 and 19 in McCarren Park in Brooklyn. Separately, Schaffer, Baudisch and Harris will perform in No Place to Hide on Wednesday, July 9 and 16 in Tompkins Square Park and Thursday, July 10 and 17 in Washington Square Park. For more information, visit www.livingtheatre.org.

“With this next round of performances, we have taken the play back out to the people,” Schaffer said. “This allows us once again to connect with the community at large — including the non- theater-going community and other communities that are not typically found in the Living’s audience.”

Drawn to avant-garde, political and experimental theater as a high school student, Schaffer was inspired by the writings of Julian Beck, founder of The Living Theatre, the oldest experimental theater group producing in the United States. He started writing what would become the first version of The Life of the Theatre, an original script that follows The Living Theatre’s first exodus from the United States, after their theaters were shut down in the early 1970s. “During this time they toured most notably in Brazil and led a very nomadic existence, traveling as a group from country to country to perform their plays,” Schaffer said.

Mentored by Professor Cindy Rosenthal during his four years at Hofstra, Schaffer fine-tuned his script and presented The Life of the Theatre in May 2013 as part of the Drama Program’s Student Rep, which gives students the opportunity to stage their original projects for an audience. That performance caught the attention of Judith Malina, Beck’s partner in life and work, and Brad Burgess, The Living Theatre’s associate artistic director, which earned him an invitation to join The Living Theatre upon graduation.

This month’s alfresco performances will help prepare The Living Theatre members for their pilgrimage to Burning Man in August, where they will run a theater for 12 hours a day, performing No Place to Hide, The Life of the Theatre and other historic Living Theatre pieces. The event takes place the week leading up to and including Labor Day in Nevada’s Black Rock Desert.

“Burning Man has long been a symbol of the community-based, anarchistic artistic creation that the Living has represented and sought since its inception in ’47,” Schaffer said. For his part, Schaffer is interning for The Living Theatre to help raise awareness for its Burning Man campaign. For more information or to make a tax-deductible donation, visit https://www.indiegogo.com/projects/the-living-theatre-at-burning-man.

Closer to home, the Hofstra alumnus recently returned to campus to help prepare for the upcoming performances of Life. Schaffer rehearsed in the rehearsal rooms in Lowe Hall on Sunday, July 6. “It’s an amazing and bizarre thing to be back in the rooms I took classes and rehearsed in, working on this piece, but it is also where the show first began to breathe, and still a home for both the play and myself,” he said.