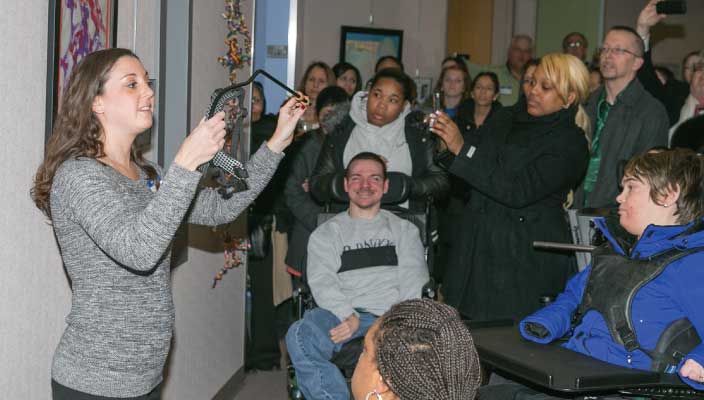 Art therapist Samantha Hasher, MA, ’06 chose to pursue a career that would allow her to help people with disabilities foster personal development through a creative outlet. Along the way, she has nurtured the next generation of clinicians studying at Hofstra, in much the same way that she was helped as a student.

Hasher, a graduate of Hofstra’s Master of Arts program in creative arts therapy, works at the United Cerebral Palsy Association of Nassau County Inc. (UCPN) in Roosevelt, NY, where she helps 135 adults with cognitive and physical disabilities such as cerebral palsy, Down syndrome, deafness and blindness. The art therapies and techniques that she teaches in a program called Life Options encourage people with disabilities to discover new ways of self-expression that help build self-esteem, independence and healing.

“I have learned a lot from working with people with disabilities. … In particular, that we are more alike than we are different.” — Samantha Hasher, MA, ’06

“I have learned a lot from working with people with disabilities,” she says. “In particular, that we are more alike than we are different. We are all people with feelings and emotions; we all experience happiness, sadness, fear and disappointment. We all want opportunities to succeed and feel good about ourselves.”

She keeps strong connections with Hofstra: In February, she was on campus for an art gallery exhibit sponsored by the School of Health Sciences and Human Services featuring the work of artists from UCPN and another local center. The next month she returned to Hofstra for the annual creative arts therapy conference where she led a workshop on how to create programs with the award-winning Life Options format and reconnected with her mentor and former professor, Margaret Carlock-Russo, now the co-director of Hofstra’s arts therapy graduate program. Hasher was introduced to UCPN when she began an internship at its Children’s Learning Center as a graduate student in 2005, an inspiring experience that she says convinced her that she was on the right path. Her supervisor at the time, Laura Buechler, is also an alumna of Hofstra’s graduate program.

“Sam demonstrates caring and enthusiasm for the work she accomplishes every day,” says Buechler, who still works in UCPN’s children’s program and collaborates with Hasher on joint projects. “She has been able to bring all of the components of creative arts therapy – from art making to video creations and writing therapy – to the clients she serves. Her wonderful spirit spills into every area that she becomes involved with during the day.”

Hasher was hired the following year for UCPN’s Life Options program, and in 2009 began supervising interns from local graduate programs. In the last five years, more than a dozen Hofstra students have interned in the art therapy program in Life Options.

“I enjoy providing opportunities for students and helping guide them on their journey in the field,” she says. “It’s very meaningful to me because I was once in their shoes, and it’s especially important for me to work with Hofstra students because it’s my way of giving back.”

One intern, Jamie Coppola ’13, who worked more than 600 hours at UCPN, considers Hasher a mentor and calls her internship there “life changing.” Hasher, in turn, says, “Jamie always went above and beyond. She had a natural ability to connect with people, and made a lasting impact on us.” Coppola makes time to go back and visit with program participants, who still ask about her.

Throughout her career, Hasher has not only taught the science and application of her discipline to interns, but she’s also shared her passion for advocacy. Coppola has joined her at rallies where they protested cuts to the state Office for People with Developmental Disabilities. Hasher, who just finished a term as president of the New York Art Therapy Association and now serves on its board as governmental affairs chairperson, has also traveled to Albany to talk to senators and state Assembly members about funding. “It’s important to advocate for those who do not have a voice.”

She’s also taught her students the importance of advocating for their own success as well, and often shares with them how she got her job at UCPN. When she first joined the organization, the available position was as a science teacher. She used her art therapy skills to teach science in creative ways – making papier maché planets, digging in the sand for dinosaur bones, and creating a sensory book to study the five senses.

In time, she earned her license and board certification as a creative arts therapist, approached her supervisor, and successfully campaigned for a title change to art therapist. “I feel so happy that I was able to pave my own way and become the first art therapist at Life Options,” she says. “It took courage to ask for what I wanted.”

It’s a story that UCPN intern Ling-Yu Lin ’15, an international student from Taiwan, has taken to heart. “Sam taught me that I should not be afraid of making mistakes.”

For Lin, creative arts therapy is a chance to combine her two lifelong passions, psychology and art, both professionally and personally. “I draw a lot when I have pressure, and in my experience, art relieves my stress,” she says. “After studying at Hofstra, I learned that art did not just relieve stress, but it also has a healing power to help people.”

She wants to use her degree and her experience at UCPN to open a similar center when she returns to Taiwan next year. Sam Hasher, meanwhile, continues her work at UCPN and plans to eventually open a private practice. She also has plans to be in Taiwan one day for the grand opening of Lin’s center. 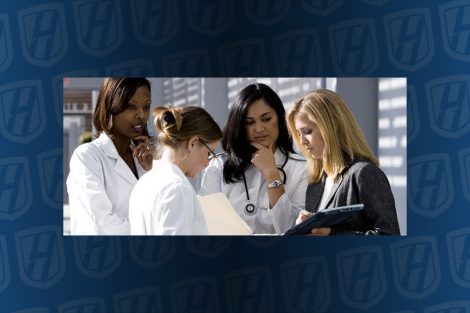