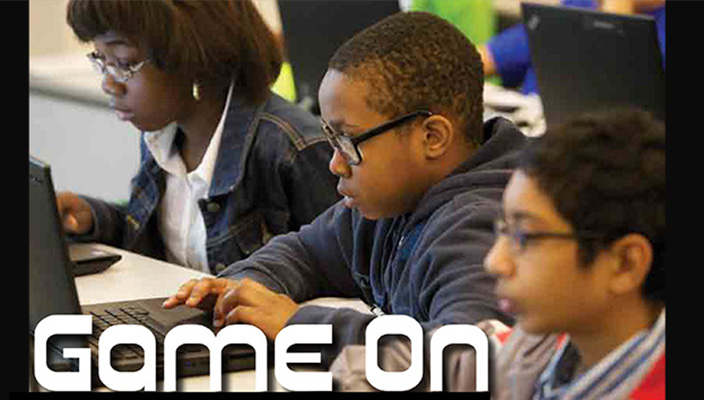 Ideas and questions came like keystrokes, quick and sharp, as the roomful of designers brainstormed concepts for new computer games.

How about a game set in a classroom, one designer ventured, where the main character is a student trying to sneak out?

Another asked: Would there be obstacles like a teacher or a security guard locking the door? What about other types of traps – like a dead-end path?

Or maybe, a third designer suggested, the game should be set up like a scavenger hunt in which the student would have to find different keys to escape the classroom.

“You guys are getting concepts just like my college kids here at Hofstra,” he told the group of about 25 students one morning about a month into the program.

“No idea is a bad idea,” he said. “The key word is ‘goal.’ What is the goal of the game? That’s a decision that as a designer, you have to make early on.”

The goal of the MathApps Saturday Academy, supported by a $30,000 grant from Motorola’s Innovation Generation program, is simple: teach math skills by making them a means to an end, namely building a game that kids want to play.

“They’re thinking – ‘I want my ball or my character to move from this point to that point, and how do I do that?’” Joseph said. “Now they’re motivated to learn math to make it happen.”

Every Saturday morning, the diverse group of about 50 students in grades 6-9 spend three hours on campus with Joseph, Stemn, and several Hofstra students. They split up into two groups, and spend half their morning on game design, and the other on math skills, solving problems they don’t traditionally encounter in school to build logical reasoning ability.

“This is like an adult class right now,” said Paras Patel, Joseph’s graduate assistant, who is in the second year of Hofstra’s MS program in computer science. “I didn’t think they would get it. I gave them less credit than I should have. But they get it. They all get it.” Franshuas Rodriguez will be among the first to earn a degree from Hofstra’s new Technology for Learning program, which began in fall 2013. She is working with the MathApps Saturday Academy for one of her graduate classes. Two other students in the graduate program, Christopher Dazzo and Susan Byrns, as well as an undergraduate math education major, Ethan Batterman, also help out with the academy.

“I’m learning and teaching at the same time,” she said. “I’m not just behind a computer; I’m actually able to implement this in a classroom setting with students.” Rodriguez, a foreign language teacher, envisions using game design to teach principles of grammar to her students at Smithtown Christian School, a parochial high school in Smithtown, N.Y. “Technology is just another language,” she said. 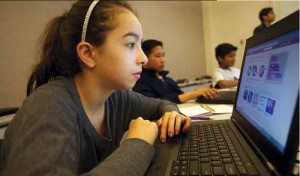 “It’s their language. If you’re going to be an educator, you need to be savvy about this.”

Nicolette Auld-Griffith, 12, a seventh-grader at Valley Stream South High School, loves solving math riddles and puzzles. “Three hours on a computer?” she said, her eyes widening. “I love this.”

The MathApps Saturday Academy even made a morning person out of Caroline Doglia, an eighth-grader at Wisdom Lane Middle School in Levittown, N.Y.

“It’s kind of like a whole new world,” she said. “I don’t like waking up early on Saturday mornings, but I don’t mind for this.”

After the brainstorming session that morning, Joseph put the students to work with Scratch, a free programming language used to create stories, animation and simple games. He took them through how to use keyboard strokes to create sounds and movement. “Now, just play around with it,” he said. “This is just the beginning.”