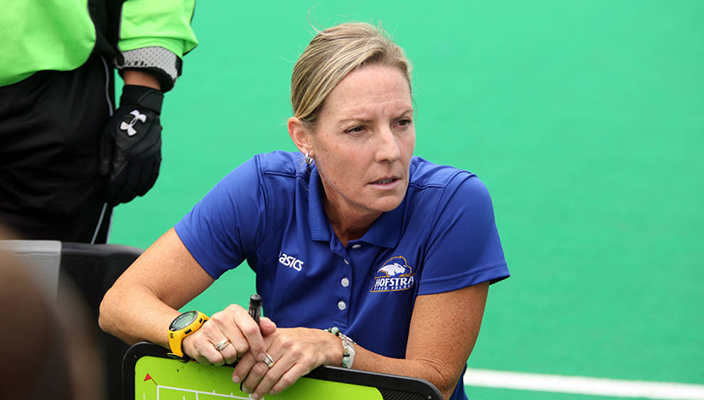 Hofstra Head Field Hockey Coach Kathy De Angelis today announced the Pride’s 19-game, 2014 schedule that includes six home games and three contests against opponents who qualified for the NCAA Division I Field Hockey Championship last season.
***2014 Schedule***After a preseason scrimmage against Siena College on August 22, Hofstra will open the regular season with four road games beginning at Albany on Friday, August 29 and at Colgate on Sunday, August 31. The Great Danes of Albany recorded a 16-5 mark in 2013 including a 4-1 victory at Hofstra. The Pride has not faced the Raiders of Colgate since an 8-1 Hofstra win in Hamilton, NY on 2011. The following weekend the Pride travel to Yale University in New Haven, CT for matches against Sacred Heart on Friday, September 5 and the host Bulldogs on Sunday, September 7. Hofstra faced both teams on Long Island last season, topping Sacred Heart, 3-1 and edging Yale, 4-3 in overtime.Hofstra begins its home schedule at the Hofstra Field Hockey Stadium on Wednesday, September 10 when the Pride host the Stags of Fairfield. The two teams met in 2013 with the Stags posting a 3-2 victory in Connecticut.Following the Fairfield game, Hofstra heads out on the road for six games, including the Pride’s only in-season tournament, to wrap up the month of September. It all starts at the Vermont Catamount Classic on Saturday and Sunday, September 13-14. Hofstra will face the Vermont on Saturday before squaring off against Maine on Sunday. The following weekend, Hofstra returns to New England for contests at UMass at Lowell on Friday, September 19 and at New Hampshire on Sunday, September 21. The Wildcats of UNH recorded a 15-7 record and advanced to the NCAA Championship in 2013. The month of September wraps up with road games at Quinnipiac on Thursday, September 25 and at Syracuse on Sunday, September 28. The Orange, which captured last year’s Hofstra-Asics Invitational, posted a 16-4 record and also qualified for the NCAA Championship in 2013.Hofstra opens the month of October with three home games in the first four outings including two Colonial Athletic Association contests. The Pride will host Northeastern on Friday, October 3 in the CAA opener before entertaining Columbia on Sunday, October 5. Hofstra topped the Huskies in a 5-4 thriller last season while the Lions of Columbia return to the schedule after a one-year hiatus.The Pride travel to Drexel for a CAA contest on Friday, October 10 before returning home for a non-conference tilt against Rider on October 19. Both teams were 13-7 last season. Hofstra then hits the road for two conference games, at Towson on Friday, October 24 and at defending CAA champion and NCAA participant Delaware on Sunday, October 26. The Blue Hens were 17-5 in 2013.Hofstra will close out the regular season with CAA home games against William and Mary on Friday, October 31 and James Madison for Senior Day on Sunday, November 2.The top four teams during the CAA regular season will advance to the CAA Field Hockey Championship on Friday and Sunday, November 7 and 9 at the home of the number one seed.