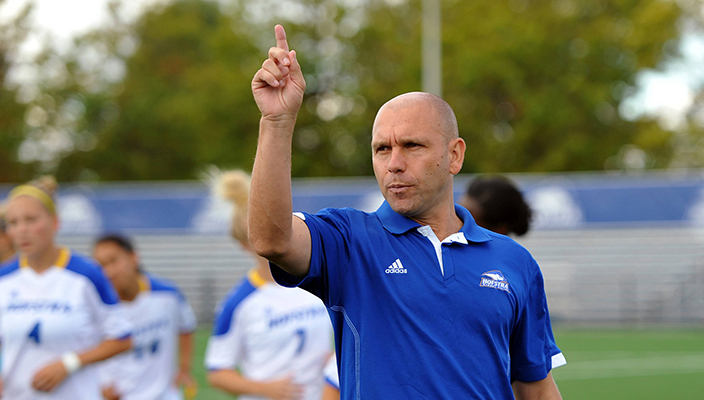 Matchups against three opponents that finished last season ranked in the national top-20 highlight a challenging slate for the 2014 Hofstra Women’s Soccer schedule that was released today by Head Coach Simon Riddiough.

Hofstra’s 18-game regular season schedule includes meetings against five NCAA qualifiers and three squads that won at least one game in the tournament. The schedule will see the Pride go head-to-head against a field that posted a collective 186-129-44 record in 2013. The Pride will face UConn on the road in the season opener on Aug. 22.

“This is the toughest and most ambitious non-conference slate we have ever scheduled,” Riddiough said. “While challenging, it shows the trust and belief our staff has in the team we have assembled, and the direction of the program as we strive for a Colonial Athletic Association championship.”

The Pride will welcome Bucknell in the home opener at Hofstra Soccer Stadium on Aug. 24 at noon before hosting Saint Joseph’s a week later on Aug. 31 at 1 p.m.

Riddiough’s team will then play in one-of-two scheduled tournaments when the team treks to West Virginia to play WVU and Indiana State. Set for Sept. 5, the game against the Mountaineers will give Hofstra a chance to see how the team stacks up against the defending Big 12 champion. WVU was ranked 12th in the final NSCAA poll after advancing to the second round of the NCAA Tournament.

From Sept. 12-14, Hofstra will face two national powers in the University of Virginia Tournament. The Pride will face the Blue Devils on Sept. 12. Duke is coming off an appearance in the national quarterfinals after knocking off Colorado College, Florida and Arkansas before falling to Virginia Tech in the round-of-eight.

Two days later, the Pride will take on a Virginia squad that was ranked third in the final NSCAA poll after a 24-1-1 season that culminated with a national semifinal appearance. Virginia posted the best scoring offense in Division I last season by averaging three goals per game. The Cavaliers scored 78 goals to lead the country. Game time is 2:30 p.m.

Hofstra will return home to host Yale on Sept. 19 before facing MAAC-champion Monmouth on the road on Sept. 21 to end the non-league portion of the schedule. Monmouth was 17-2-2 last season.

The Pride will commence CAA play on Sept. 26 with a road game at Elon at 7 p.m. The contest will mark the first CAA game for Elon with the Phoenix entering its first season in the conference since moving from the Southern Conference.

Following a Sept. 28 game at William & Mary, Hofstra will host three straight CAA matches starting with James Madison on Oct. 3 in a rematch of last season’s CAA semifinals in which the Pride fell to the Dukes. Towson will come to town on Oct. 5 before reigning league champion Northeastern visits Hofstra Soccer Stadium on Oct. 11.

Back-to-back road games versus the College of Charleston and UNCW from Oct. 17-19 will conclude the road section of the schedule. Hofstra then rounds out the regular season with an Oct. 24 game versus Drexel followed by a Senior Day meeting versus Delaware on Oct. 26 at 1 p.m.

The CAA Championship quarterfinals are scheduled for Nov. 2 at the higher seeds. The semifinals and title game are set for Nov. 7-9 and will be held on the top seed’s home field.

Hofstra will host UMD in a home scrimmage on Aug. 14 and will also scrimmage FDU at Massapequa’s Burns Park on Sunday, Aug. 17 at 2 p.m. before kicking off the season less than a week later.