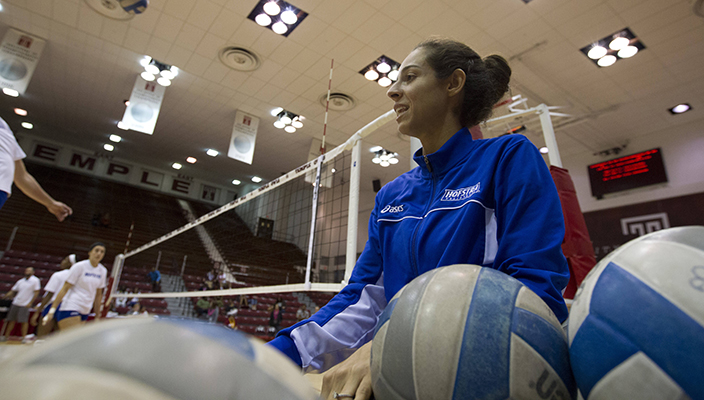 Hofstra Volleyball Coach Emily Mansur, who was named to her post on May 7, announced today her squad’s schedule for the upcoming 2014 campaign.

The slate will feature four in-season tournaments, including trips to Bucknell and Connecticut, and 17 home matches at the Mack Physical Education Center.

“We are looking forward to the upcoming season,” commented Mansur. “The schedule will be a challenging one that we know will help us prepare for the conference schedule. The team can’t wait to see all of our fans, families, alums and members of the Hofstra community out supporting the team.”

Hofstra will open the season with the annual Hofstra Asics Invitational on August 29-30. The two-day, five-team tournament will feature nine matches during the invitational with Hofstra opening up the season at 11:30 a.m. on Friday, August 29 with a match against local rival St. Francis Brooklyn. Also taking part in the tournament is Lafayette, Quinnipiac and Santa Clara. The Pride closes play with a 7:30 p.m. match on August 30 against Santa Clara.

In the Pride’s first mid-week match of the season, Hofstra will entertain Stony Brook on September 3 at 7 p.m. The squads last faced each other in 2009 when Hofstra won a five-set contest.

From there Hofstra will begin Colonial Athletic Association (CAA) play, with just one non-conference match remaining (vs. Sacred Heart on November 4). The match against the Pioneers will be the Pride’s second in 2014 against Sacred Heart, marking the second non-conference opponent Hofstra is facing twice. The Pride will face Connecticut at the Bucknell and UConn tournaments.

The first CAA match will be an exciting one for Hofstra as the Pride will face conference newcomer Elon down in North Carolina on September 26. The 7 p.m. match will occur at the same time as the Hofstra Women’s Soccer team battles Elon on the road as well. These two contests will be the first time Hofstra and Elon face each other as conference opponents.

That weekend will also see Hofstra play another match down in North Carolina as the Pride will face UNCW on September 28 to conclude that southern swing.

From there the Pride will take on the defending CAA Champion, Charleston, down in South Carolina on October 10. The following weekend will see Hofstra play two more road matches with contests at William & Mary (October 17) and James Madison (October 18).

The CAA Championship will take place at the highest seed on November 21-23.