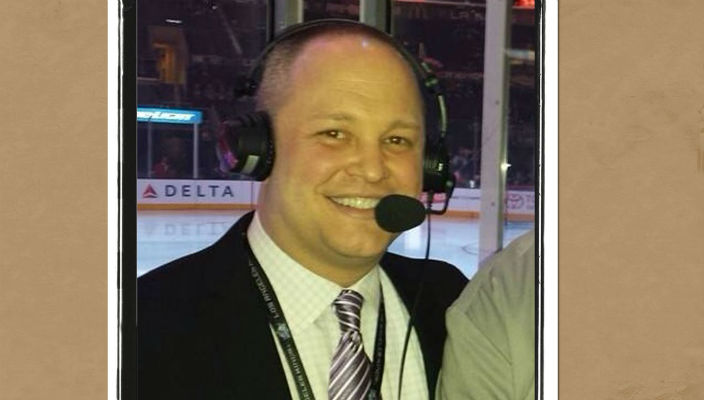 As the L.A. Kings and N.Y. Rangers get ready to face off in the NHL’s Stanley Cup championship series, News@Hofstra caught up with Dave Joseph ’96, the Kings’ public address announcer, as he prepares for Game 1 Wednesday night in Los Angeles.  Joseph majored in communications and minored in English.  He played hockey all four years, serving as captain in his senior year and as assistant head coach for a few years after he graduated.

Q. How are you prepping for Game 1 of the finals tomorrow night?  Nervous?

A. I’m prepping the same way I usually do – going over the lineups for both teams, name pronunciations, game scripts – everything that I would do for a regular season game.  I’m also reading up on the Rangers and getting familiar with their players and line combinations.

I covered the Kings for ESPN LA 710 during their 2012 Stanley Cup Title run but this is my first Stanley Cup game as PA announcer for the team.  I’m actually not nervous at all.  I’ve been preparing for this situation for quite some time so I feel like I’m ready to go.  I’m anxious to get the series started and hoping the Kings can capture a second Stanley Cup!

Q.  What’s the best part of being the public address announcer?

A. The most interesting part of being the PA Announcer is being the conduit between the game and the fans.  I try to convey the energy on the ice to the people in the arena.  The interaction with the NHL on-ice and off-ice officials can be very interesting and informative as well.  My location – ice level at the red line – almost makes it feel like I’m a part of the action.

Q.  You’ve had a really successful career as a sports journalist in Los Angeles with both the Kings and ESPN.  What inspired you to pursue this as a career?

A.  I started in radio at the age of 16 in my hometown of Ishpeming, Michigan.  While I got my start in music radio, I always played sports and knew I wanted to make that a large part of my career.  I played hockey at Hofstra and also coached there after my playing career but knew I wasn’t nearly talented enough to play professionally, so I decided to combine radio and sports by becoming a sports journalist.

Q. When you were a student at Hofstra, did you root for the Islanders or Rangers?

A.  I didn’t root for either  — I grew up a Chicago Blackhawks fan! — but I worked part-time for the Islanders for a few years while I was in college.  My hockey coach at Hofstra, Brian Edwards, was working in the Sales and Marketing Department for the Islanders in the mid-90’s and brought me in to help out the sales department.  This opportunity also led to me and some fellow teammates shooting t-shirts out of air-powered cannons from the ice into the crowd at Nassau Coliseum.  Good times.

Q.  Hofstra’s radio station WRHU has been the flagship station of the New York Islanders since the 2010-11 season, the first and only college station in the nation to have this kind of partnership with a professional hockey team.  Our students work the games as color commentators, rinkside and locker room reporters, and behind the scenes in engineering and production.  Were you ever involved with WRHU when you were a student here?

A.  I never worked for WRHU, but that’s only because I had a part-time job working for 106.1 WBLI.  I got hired there when I was a sophomore and didn’t have the time to work at WBLI, play hockey, and work at WRHU.  I would’ve loved the opportunity but unfortunately I could never work it into my hectic schedule.  But overall, the School of Communication prepared me well.  The courses were taught by professionals who had either been in the business at some point or were currently in the business.

I think the opportunity that students have now is tremendous!  What a great way to get your foot in the door in both radio and sports and get actual hands-on experience at the same time.  Plus getting to be a part of an NHL radio broadcast?  Priceless.