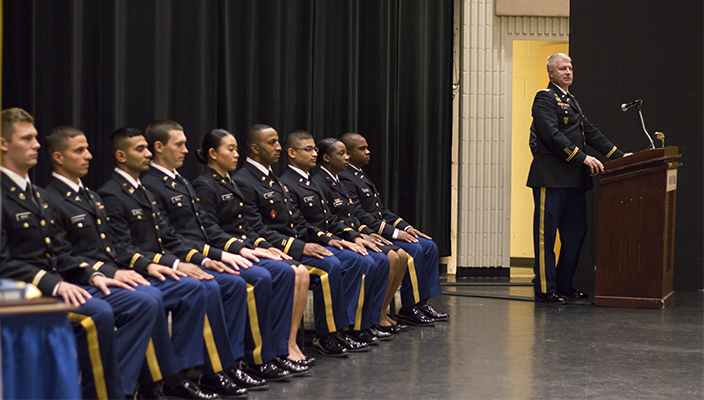 Nine seniors were commissioned as officers in the grade of Second Lieutenant (2LT) in the United States Army when Hofstra University’s Military Science Department held its Spring Commissioning Ceremony Friday, May 16, 2014, at The Helene Fortunoff Theater in Monroe Lecture Center.  Hofstra is a host university for the Senior Army ROTC Program on Long Island and for some additional area institutions.

The ROTC Cadets participated in moving traditions, including the Silver Dollar Salute symbolizing an officer’s first salute and having their 2LT rank fastened on their uniform by spouses, parents and other family members. The ceremony was moderated by Lieutenant Colonel (LTC) David L. Daniel, who used the occasion to thank his Cadre and other members of the Hofstra community for their support of the program. LTC Daniel is stepping down as chair of Hofstra’s Military Science Department this summer and will be stationed in Germany. LTC Daniel will be replaced by a native New Yorker – LTC Daniel Cederman.

The guest speaker for this ceremony was Hofstra alumnus Major General Patrick M. Higgins, Class of 1980, who serves as Deputy Director, Operations/Intelligence Integration and Director for the Counter-IED Operations-Intelligence Integration Center with the Joint Improvised Explosive Device Defeat Organization (JIEDDO). The last time MG Higgins was on the stage at Monroe Lecture Center was for his own commissioning ceremony 34 years ago, and he felt moved to be back on campus again.

MG Higgins served in Operation Iraqi Freedom and among his many assignments in his distinguished career, commanded the 3rd Special Forces Group (Airborne) at Fort Bragg, where he participated in Operation Enduring Freedom. Prior to his current assignment, he was director, Joint Integrated Air and Missile Defense Organization, J-8, Joint Staff at the Pentagon.

In his speech MG Higgins offered words of encouragement to the cadets:

“It is truly an honor to be here. I must say that I am quite humbled and honored to have the opportunity to share this momentous occasion with you young patriots who have chosen to serve our nation. As I stand here today, I am thrilled to see that the battalion is soundly building men and women of character and consequence who stand ready to join ‘America’s Army.’

“America’s Army is the best manned, best trained, best equipped, best led and most decisive land force in the world. As Cadets you have strived, risen, excelled … and have grown into leaders. And today you will become officers! Just as every generation before, you will see your Army transition to new missions and new capabilities. You will see it adapt and improve to answer our defense needs. But with every new capability developed you can be sure that our Army will maintain the stellar reputation for excellence it has earned over the past two centuries.  Let me tell you all that you need to succeed in this sacred task: strength, courage, character and humility. These words held special meaning for me during my formative years as a cadet, and have remained watchwords of duty for me throughout my 34 years of service as an officer.”

ROTC Cadets participating in the ceremony were:

2LT Ross Nikides, who graduated with a BA in political science, global studies and history.

Both are entering the Military Intelligence branch of the Army.

A singing group from the Baldwin High School Choir, The Sweet Adelines, performed a beautiful rendition of the National Anthem at the ceremony.