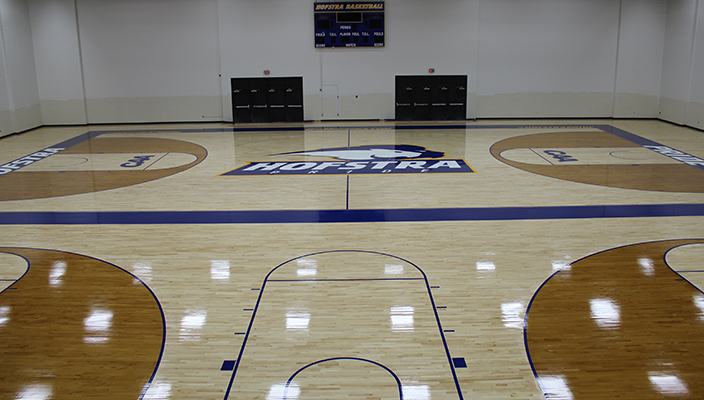 The Hofstra University Department of Athletics, along with the Pride Men and Women’s Basketball programs, are excited to reveal the new court design that will adorn the floor in the Mack Sports Complex and in the brand-new Hofstra Basketball Practice Facility.

The recently completed floor in the practice facility is the first step in the process of completing work on the Hofstra Basketball Practice Facility. Future work will include graphics and padding on the walls, along with audio/video and athletic training equipment.

The photos available today are of the new court in the Hofstra Basketball Practice Facility. The primary court photo with this release of the practice facility includes the main court design, which will be the same used in the Mack Sports Complex. The practice facility floor also includes two half courts and an additional foul lane, which you can see in the photo gallery.

“We received many outstanding submissions from our dedicated and passionate fan base,” commented Hofstra Vice President and Director of Athletics Jeffrey A. Hathaway. “It is with a great deal of excitement that we reveal what the court design will look like. We incorporated aspects of a variety of entries and today marks the culmination of an extensive process that involved many different constituents that care deeply about the Hofstra Basketball programs. We appreciate the support from our fans in the Hofstra community, along with the input from our coaches and University administrators.”

“In addition, nine different entries have been chosen to receive a pair of season tickets for both the 2014-15 Hofstra Men and Women’s Basketball seasons. These winning entries showed their creative ability and played a key role in formulating a plan for the new court design,” continued Hathaway.

Everyone else that submitted a design will receive two complimentary tickets for both a men’s and women’s basketball game of their choice. Winners and others will be notified in June regarding how to redeem their tickets.

“What an exciting time for our basketball programs,” said Hofstra Head Men’s Basketball Coach Joe Mihalich. “The new court design looks awesome and we can’t wait for next season to begin so our loyal fans can see it in person and cheer us on to victory. Thanks to everyone who took part in this exciting contest!”

“I was blown away at how great the new court design came out,” stated Hofstra Head Women’s Basketball Coach Krista Kilburn-Steveskey. “This was the culmination of an exciting time for the Hofstra Basketball programs and I know our student-athletes are looking forward to playing on the court in the near future.”

As you will notice in the newly-released design, there are several new variations to the court. The most noticeable change includes the large Hofstra Pride logo at center court. The logo measures 35 feet wide by 20 feet, eight inches tall and replaces the Hofstra “H” which was previously at center court.

The next major alteration was staining the interior of the three-point arc a darker shade than the rest of the court.

The changes don’t end there as every detail of the court was thoroughly and carefully executed.

The perimeter of the playing area has been surrounded by a four-foot thick border of Hofstra blue to help the new court resonate and give clear definition to the playing area.

On the baselines, the east end will now say “HOFSTRA” and the west side will now say “PRIDE”. Previously both ends of the court said “HOFSTRA PRIDE”.

Work on the court was done by Milburn Flooring Mills, located in Copiague, NY.

Work is currently in the process of being completed in the Hofstra Basketball Practice Facility and the floor in the Mack Sports Complex will be done this summer.