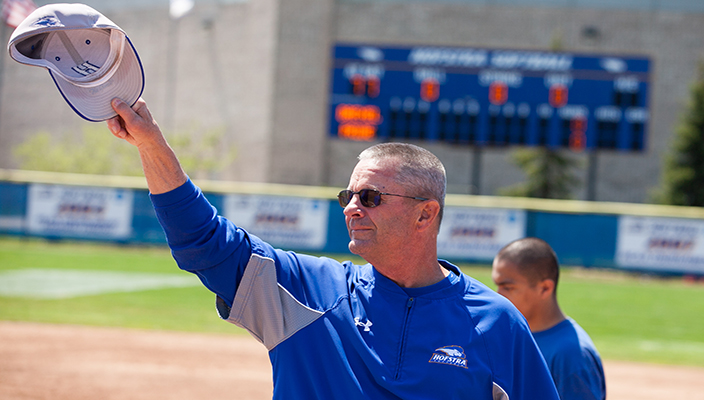 Following an unprecedented successful career that resulted in a winning campaign in each of his 25 seasons at the helm, Hofstra University Head Softball Coach Bill Edwards has announced his retirement.

“It’s been a great run and so much fun working with so many great student-athletes,” Edwards said. “It has been rewarding to see that so many still embrace old-school coaching. The only thing I regret with leaving now is not being able to work longer with our administration. But I know they’ll take good care of Larissa (Anderson). The timing is perfect to turn it over to Larissa, who I respect and admire so much. I’ve given her more and more responsibility every year and she’s thrived. She’s one of the top coaches in Division I. The incoming recruits are in great hands and the program will make a seamless transition.”

Edwards crafted a remarkable career from 1990 to 2014 that spanned 1,350 games, leading Hofstra to all 15 of the program’s NCAA Tournament appearances. Under his guidance, Hofstra went from a below .500 team in 1989 to a nationally respected power that captured 18 postseason conference championships, including 10 Colonial Athletic Association (CAA) titles (including the first seven in the league’s history).

Edwards’ extraordinary run of success led to his 2009 enshrinement in the National Fastpitch Coaches Association (NFCA) Hall of Fame. An efficacious leader, the Pride finished at least 10 games better than .500 in 23 of his 25 seasons. This past February Edwards earned career victory No. 900 and finished his NCAA run with a 928-419-3 ledger that is good for a .687 winning percentage. He is the winningest coach in any program in the history of the Hofstra Department of Athletics.

“In the world of collegiate softball, the name Bill Edwards is synonymous with success,” said Hofstra University President Stuart Rabinowitz. “His remarkable tenure at Hofstra was marked by his student-athletes’ excellence on the field and in the classroom. He built the Hofstra Softball team into a nationally prominent program and his contributions to the University community are greatly appreciated. As his distinguished career as a coach and a teacher comes to a close, I wish him the best on his retirement.”

“It’s hard to thoroughly articulate what Bill Edwards has meant to Hofstra University, our athletic department and the softball program,” commented Hofstra Vice President and Director of Athletics Jeffrey A. Hathaway. “Coach Edwards has been a pillar of success during his amazing career and we are thankful for everything he has done to put our softball program among the nation’s elite. His dedication to our student-athletes’ success in the classroom and on the softball field is evidenced by their numerous academic and athletic accomplishments. His student-athletes also truly understand what it means to give back to others. I have tremendous admiration for Bill’s coaching style and ability to lead people. He has succeeded at all levels of competition and in multiple sports. As successful as he is as an educator and coach, he is an even better person. Our Hofstra Softball program is what it is today because of the outstanding work of Bill Edwards. I speak for all of my colleagues in the Hofstra Department of Athletics when I say thank you to Bill for your incredible career and congratulations on your retirement. We wish Bill, Janie and the entire Edwards family the very best of what life may offer. They will always be significant members of the Hofstra Family.”

Hofstra won a regular season or conference tournament title in 22 consecutive seasons entering 2014. This season the Pride earned an at-large bid and defeated Bryant before falling twice to Southeastern Conference (SEC)-member Texas A&M in the NCAA Norman Regional. The Pride has won at least one game in each of their last 12 NCAA Tournament appearances.

In 2013 Edwards helped Hofstra post a school-record 46 wins en route to winning the CAA regular season and tournament championships. Hofstra went 3-2 in the NCAA Columbia Regional in advancing to the finals by defeating Oregon State twice and forcing an elimination game against No. 8 Missouri via a 10-0 (5 inn.) win before falling in the regional title game.

Edwards’ notable career included recognition from his fellow coaches in the CAA, as he captured six consecutive Coach of the Year honors from 2008 to 2013 in balloting done by his colleagues. His best win totals came in the later stages of his career with Hofstra, posting 40-win seasons in four of his final six seasons.

His career record currently places him in elite company in the sport’s history. Despite starting his collegiate softball coaching career after a successful stint as a college hockey coach at Iona and as a coach and educator for three decades in the Commack school district on Long Island, Edwards is currently ranked 21st in the NCAA Division I Softball Coaches all-time victories list.

This season, Edwards became just the 23rd Division I coach in history to reach 900 career wins and his win total is the 14th-most among active Division I coaches. Hofstra ended the 2012 and 2013 season nationally ranked in the NFCA final polls.

Hofstra twice came within one victory of making the Women’s College World Series under Edwards’ tutelage, including 2004 when the Pride won four games, including a 1-0 victory over No. 7 Stanford. In 2012 Hofstra defeated UCLA and San Diego State twice to win the NCAA Los Angeles Regional. Hofstra’s first-ever regional title propelled the team into the Super Regionals against South Florida, where the Pride took Game 1 with a 2-1 win in 11 innings before a pair of 2-1 losses ended the run just short of Oklahoma City.

Edwards has been recognized for his fantastic career by numerous organizations. He is a 1989 Iona Hall of Fame inductee for leading the men’s hockey team to a 123-50-11 record in 11 seasons (1968-79), including a 33-14-3 varsity team record when the program was elevated in status for the 1976-77 season. Earlier this month, he was also enshrined in the Suffolk Sports Hall of Fame.

Edwards, a teacher in the Commack School District from 1967 through 1999, worked and coached at John F. Kennedy Junior High School, Wood Park Elementary School and Commack High School. He served two stints as freshman football coach at Kennedy Junior High School from 1972 through 1976, and 1979 and 1980, and was also the freshman baseball coach from 1975 through 1980. When he moved on to Commack High School, Edwards served as offensive coordinator from 1981 through 1983. During those three years, Commack won three league titles, two conference championships and one Suffolk County championship. In 1993 he served as head football coach at Commack.

Edwards and his wife, Janie, have two grown daughters, Shari, who played NCAA Division I softball at Northern Illinois and coached at Hofstra, and Karen, a licensed practical nurse who is now a director at an assisted-living facility. Edwards received a bachelor’s in physical education from Northern Michigan in 1967 and a master’s from Stony Brook in 1975.