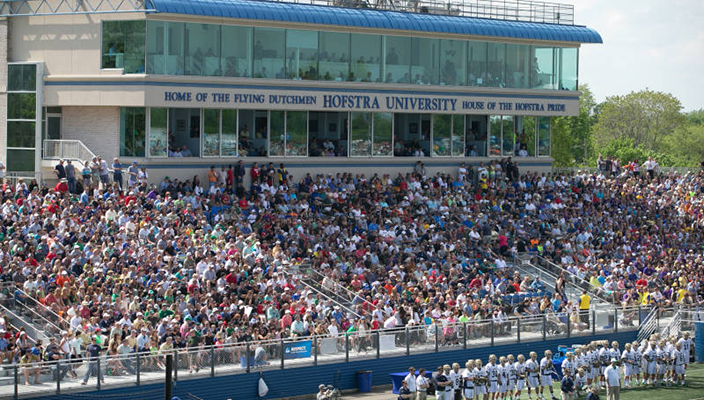 Maryland Postgame Press Conference / Bryant Postgame Press Conference
Notre Dame Postgame Press Conference / Albany Postgame Press ConferenceMaryland advanced with a 16-8 win over Bryant University while Notre Dame advanced with a thrilling, 14-13 come-from-behind overtime victory over the University at Albany in the nightcap.The quarterfinal doubleheader was played before a sell-out, Shuart Stadium record crowd of 13,519, which surpassed the previous mark of 13,447 achieved when Hofstra University hosted the 2011 NCAA quarterfinals. Saturday’s crowd is also the third-largest NCAA Division I Men’s Lacrosse Quarterfinal crowd in history following 17,017 at Navy in 2008 and 14,122 at Gillette Stadium in Foxborough, MA in 2011.In the first game, senior Mike Chanenchuk tallied five goals and added four assists and Connor Cannizzaro, Jay Carlson and Joe LoCascio each added three goals to lead the seventh-seed Maryland Terrapins to a 16-8 victory over the Bryant Bulldogs.The victory sends the Terrapins into their 22nd NCAA Championship semifinal. Maryland improved to 13-3 with their third consecutive victory. Chanenshuck recorded his sixth hat-trick of the season and a career-high nine points in the victory. Cannizzaro, a freshman, notched his fourth hat-trick of the season and added two assists for a season-best five points. Junior Jay Carlson also posted his fifth hat-trick of the year while LoCascio, also a junior, recorded the first hat-trick of his career. Senior goalie Niko Amato made six saves in the Maryland goal for his 13th victory of the season. Bryant, which had their five-game winning streak snapped, ends their season with a school-record 16 victories against five losses. The Bulldogs were led by senior Colin Dunster with four goals and one assist while sophomore Shane Morrell added two goals.  Sophomore goalie Gunnar Waldt, who ranks fifth in the nation in goals against average, made eight saves in the loss.Maryland jumped on the Bulldogs in the first quarter, scoring seven of the first eight goals in the contest. Chanenchuk scored twice and picked up three assists, as the Terps raced to a 7-2 lead after one period. Maryland scored the first four goals in the first 4:14 as Chanenchuck, Henry West, Jay Carlson and Joe LoCascio dented the twine for the Terps. After Tucker James ended the Maryland run with his 31st goal of the year with 9:24 to play in the period, Maryland rattled off three consecutive goals by LoCascio, Cannizzaro and Chanenchuk, to boost the lead to 7-1. Dan Sipperly closed out the scoring in the first quarter with a man-up goal for Bryant.LoCascio and Chanenchuk opened the second quarter with goals to boost the Maryland lead to 9-2 before Morrell and Dunster added goals for the Bulldogs to close the deficit to 9-4 at halftime.  Maryland ended any thought of a Bryant comeback by scoring five of the seven goals in the third quarter with Carlson and Cannizzaro each adding two goals in the period to boost the lead to 14-6.Maryland outshot Bryant, 38-29 and picked up 36 ground balls to the Bulldogs 23. The Terrapins won 17 of 27 face-offs behind junior Charlie Raffa, who captured 14 of 20 face-offs. In the second game, sophomore Matt Kavanagh scored his third goal of the day 2:31 into the first overtime to lead the sixth seed Fighting Irish of Notre Dame (11-5) to the 14-13 victory over the upstart Great Danes of Albany (12-6). The Irish fought back from a 12-7 deficit with just under 12 minutes to play in regulation to score six of the next seven goals to send the game into overtime.In addition to Kavanagh’s three goals, Notre Dame received two goals and three assists from junior Conor Doyle and two goals from seniors John Scioscia and Westy Hopkins, freshman Sergio Perkovic and junior Nick Ossello . Junior goalie Conor Kelly made six saves to post his sixth win of the season. Senior Liam O’Connor captured 21 of 31 face-offs to help the Irish cause.The Great Danes were led by brother tandem of Lyle and Miles Thompson and cousin Ty Thompson. Lyle tallied three goals and added three assists and tied the NCAA Division I single season Division I goal record of 82 set by Yale’s Jon Reese in 1990. Sophomore Blaze Riordan made 14 saves in the Albany cage.After trailing 6-5 at halftime, Albany came out in the second half and scored seven of the next eight goals, including the final six goals to take a 12-7 lead 3:11 into the fourth quarter. Lyle Thompson had two goals and two assists and Ty Thompson added two goals in the spurt for Albany. But Notre Dame rallied with four unanswered goals in a 1:52 span as Ossello, Hopkins, Doyle and Perkovic tallied goals for the Irish to close to within one at 12-11. But a flurry of action in front of the Albany goal, that included two Irish shots, two Riodan saves and a third shot that caromed off the crossbar, resulted in a fast break goal by Albany senior Ryan Feuerstein with 5:44 to play in regulation. But Hopkins scored his second of the day just a minute later and Perkovic tallied his second of the day with 3:02 remaining to tie the game at 13-all. Albany was unable to get the game-winner in regulation despite having two good opportunities in the waning seconds.In the overtime, Notre Dame won the face-off and got the ball into the stick of Kavanagh, who fired a rising rocket past Riordan for the game-winner to send the Irish to the NCAA Championship semifinals for the fourth time in school history and the first time since a 7-5 loss to Loyola in 2012. Notre Dame reached the NCAA finals in 2010, losing to Duke, 6-5 in overtime.Notre Dame outshot Albany, 47-32 and picked up 39 ground balls to the Great Danes 24. Maryland and Notre Dame will face each other for the third time this season in the national semifinals next Saturday, May 24 at M&T Bank Stadium in Baltimore.