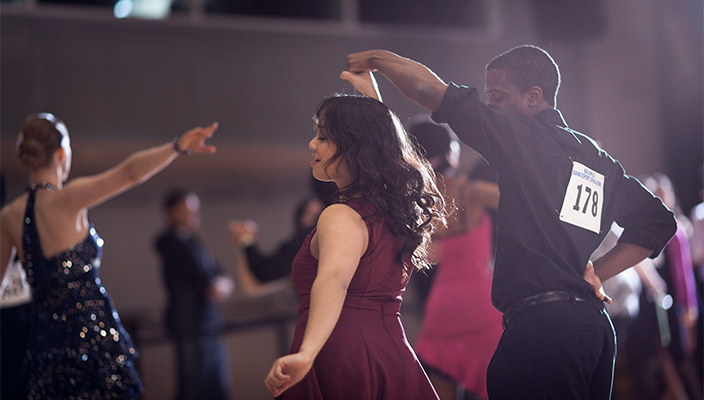 When Dr. Sharon Phillips, assistant professor of education and a former competitive swing dancer, was asked to take over PESP 047 Ballroom Dancing for the 2013-2014 year, she had no idea the class would change the lives of many of her students. The students – some of whom grew up watching Dancing With the Stars, started the class with little or no dance training. However, this past spring semester, Dr. Phillips says a few of these novices progressed to competition level and have formed friendships that will endure past the end of the semester.

While the class is offered by the School of Education, it is an elective any student can take, and some register only as a means to fulfill credit requirements, like graduating senior Kevin Afonso. Dr. Phillips is of the mind that anyone can learn to dance, and everyone in her class does learn – “although they may have different levels of skill.”

Dr. Phillips was surprised by the number of young men registering for the classes. She attributes television and movies to popularizing ballroom dancing, and helping young people realize the social benefits of knowing how to dance. Since ballroom dancing requires partners, Dr. Phillips says the first several classes are “ice-breakers” which then progress to dancing in the open position – just holding hands – before dancing in the closed position. “The students constantly rotate partners so they learn how to work on their skills with partners at different levels.”

Dr. Phillips recruited School of Education senior Alex Rothstein, a current competitive dancer, to help her coach the students.  In addition to the dance steps, Dr. Phillips offers instruction in the history of different styles of dancing and the cultures in which they were born.

Rothstein, who is graduating on Sunday and is starting his master’s in sports sciences at Hofstra this fall, began dancing competitively during his freshman year and prefers the Latin dances – cha-cha, jive, paso doble, rumba, and samba. Alex’s expertise, says Dr. Phillips, was a big inspiration to his peers. During one class he spoke about local dance competitions. When a few of the students expressed interest, the class atmosphere started to transform. “It was never the plan for this class to be what it became,” he says.

Dr. Phillips laughs and says students in her 8 a.m. class were staying through the end of the 9:35 a.m. class, and students in the later class were showing up for the earlier one to squeeze in extra practice time. Even a faculty member with an affinity for dance was showing up for the classes to hone his footwork and lend a hand to Dr. Phillips. Students like Afonso, an accounting major, drama student Kerry Gaudreau, global studies major Alyssa O’Brien, jazz and commercial music major Zack Smith, and freshman Daniela Locurto, a speech-pathology major, took the congenial atmosphere outside the classroom, where they made plans to go to dance clubs and set up rehearsals.

Dr. Phillips says Ballroom Dancing will be offered this fall and hopes students will again bond over the joy of learning to dance. Afonso, who registered for the class to squeeze in some final-needed credits, says he plans to keep dancing past graduation this Sunday. Only half-jokingly, he says of his unexpected love for dancing – “I didn’t choose ballroom dancing; it chose me.”

Congratulations Class of 2014!
School of Education Presents Webinar – “The Difference Between Teaching and Learning”