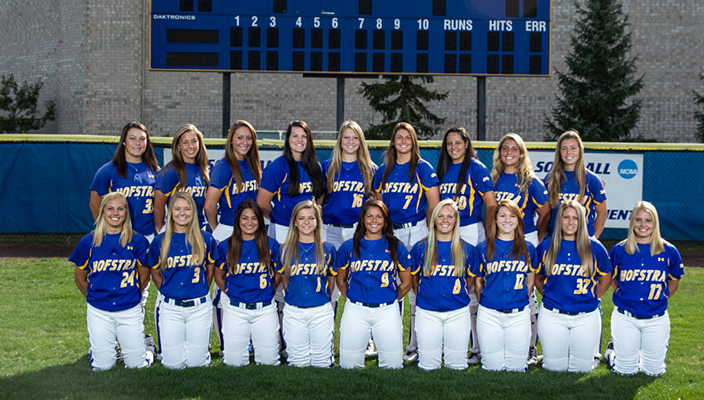 The Hofstra Softball team will open play in the Norman Regional when the Pride takes on Texas A&M on Friday at 6 p.m. from OU Softball Complex on the campus of Oklahoma. The contest will be televised on ESPN3 with free live audio also available on the PRIDE ZONE and on WRHU (88.7 FM).

Following Hofstra’s game, No. 7 overall seed and host Oklahoma will play Bryant at 8:30 p.m. The Sooners are the defending national champions. The regional is slated to run from Friday-through-Sunday. All the games in the regional will be shown on ESPN3.

Hofstra will be making its 15th NCAA Tournament appearance and will oppose Texas A&M for the first time in program history. The Pride is 33-13 and earned its first-ever at-large bid to the tournament. Hofstra qualified for its third consecutive NCAA Regional and has performed well in recent trips. The squad advanced to the program’s first-ever Super Regional in 2012 and battled Missouri in the regional finals on the road in 2013.

Hofstra Head Coach Bill Edwards has guided Hofstra to every one of the school’s NCAA appearances and has seen the Pride win at least one game in each of the last 11 trips and has compiled seven wins since 2012.

Junior catcher Erin Trippi and sophomore first baseman Maggie Hawkins both earned All-CAA Tournament honors, though the Pride failed to win a conference regular season or postseason championship for the first time in 23 seasons. But Hofstra will look to get back on track against an Aggies squad that was 35-20 in the regular season.

Both squads feature a pair of pitchers with 13-or-more wins on the season. Hofstra’s junior tandem of Morgan Lashley and Taylor Pirone has combined for 10 shutouts with Lashley going 17-5 with a 1.98 ERA and Pirone setting a career high with 16 wins (16-6) with a 1.67 ERA that was second in the Colonial Athletic Association. Pirone earned league all-first team honors and Lashley was a second-team selection.

The Aggies will counter with a pair of pitchers in Katie Marks (15-5, 3.10 ERA) and Rachel Fox (13-10, 3.37). Texas A&M carries a staff ERA of 3.55 into Friday, though the staff has been supported by a team that scored 324 runs as Nicole Morgan, Cassie Tysarczyk and April Ryan have all scored 40-plus runs this season.

Senior outfielder Rachael Senatore, who was a key member of the 2012 regional champion Hofstra squad, will try and continue to be a key run-generator for the Pride. Her team-leading 39 runs and her 15-for-16 stolen base record gives Hofstra a weapon at the top of the lineup. Sophomore outfielder Chloe Fitzgerald has teamed with Senatore to provide great base-path speed with Fitzgerald going 18-for-18 on steals while hitting a team-best .359. Texas A&M’s Emily Albus is 16-for-18 with a .320 average and a .446 on-base percentage, giving both teams a top-of-the-order threat.

Middle-of-the-order power has also been a staple of both teams. Texas A&M boasts three double-digit home run hitters in Morgan (14), Tysarczyk (12) and Amber Garza (10). All three have already collected more than 40 RBIs. Texas A&M has hit 61 home runs but has already surrendered 61. By comparison, Hofstra has hit 34 but allowed just 23.

Hawkins leads Hofstra with nine home runs and 46 RBIs while Trippi is second on the team with a career-high eight home runs and a .305 average while also catching every pitch behind the plate.

Senior shortstop Becca Bigler continues to reach base in more than half of her plate appearances (.510 OBP) while Morgan has a .503 figure. Bigler will be playing in her fourth NCAA Tournament after being a key contributor in 2010, 2012 and 2013 (an injury limited her to 14 games in 2011, leading to a medical red-shirt season).

Single-session tickets, if availability remains, will not go on sale until the first day of the tournament at the Oklahoma Softball Complex box office beginning at 3:30 p.m. Single session tickets are $15 for reserved tickets, $10 for general admission adult tickets and $8 for general admission youth/senior citizen tickets. Orders will be processed on a first-come, first-served basis and are subject to availability.