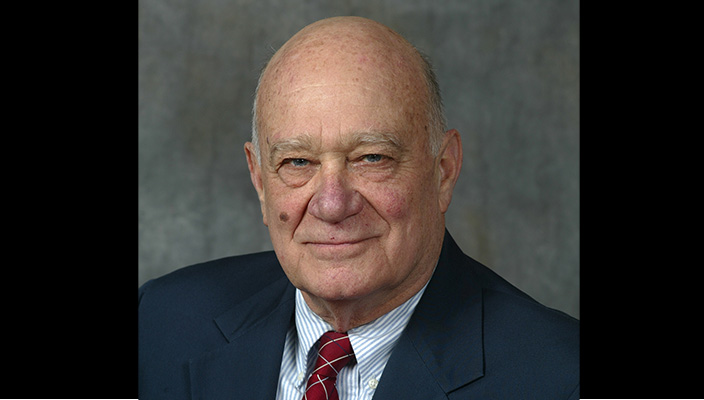 Professor of History Michael D’Innocenzo, Hofstra’s second longest-serving faculty member, was honored for lifetime achievement on April 27 by the Association of Italian American Educators (AIAE) at their 16th Annual Awards and Scholarship Celebration.

Throughout his teaching career at Hofstra, Professor D’Innocenzo has been recognized for his teaching, writing and community activities focused on civil rights and social justice. In the early 1980s he was selected as national chairperson of the United Campuses to Prevent Nuclear War. In 1985 he and his wife, Dr. Andrea Libresco, a professor in Hofstra’s School of Education, helped found the Long Island Alliance for Peaceful Alternatives.

In 1998 Professor D’Innocenzo was honored by being appointed the Harry H. Wachtel Distinguished Teaching Professor for the Study of Nonviolent Social Change, named for Long Islander Harry Wachtel, who worked closely with Dr. Martin Luther King, Jr., during the 1960s. Professor D’Innocenzo has established the Hofstra Public Policy Institute in association with the Kettering Foundation and was a founding member of the Hofstra Center for Civic Engagement. He has recently been appointed to the Board of Directors of the National Issues Forums Institute.

Professor D’Innocenzo’s work has not only impacted Hofstra students. Dr. Berliner writes, “He has made enormous contributions reaching out to high school students and fostering their respect for and knowledge of democracy and history.”

Professor D’Innocenzo said: “This recognition from AIAE is a terrific stimulus to my major projects of addressing immigration and diversity on campus and in Long Island communities. I look forward to continuing my work with both Hofstra and high school students and the University’s Center for Civic Engagement, supported in part by the Hagedorn Foundation.”

AIAE, which has its headquarters at the New Academic Building on Hofstra’s campus, was founded to enhance the Italian American image and presence in academia. The AIAE, led by Josephine A. Maietta, promotes discussion on educational issues impacting Italian Americans, supports formal and pertinent education, facilitates professional development for educators, sponsors the Programma Ponte Scholarship Program (a course of study given in Rome on Contemporary Italy, designed for Italian American college students and sponsored in Rome by FNCL and ISCOP), recognizes and presents awards to outstanding Italian American educators, community leaders and writers.