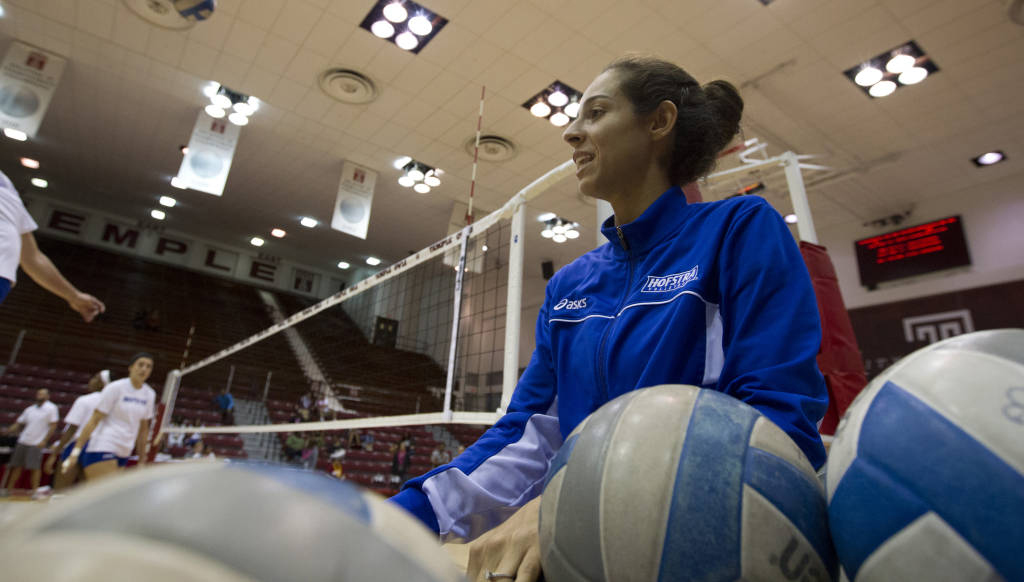 Hofstra University Vice President and Director of Athletics Jeffrey A. Hathaway announced today the appointment of Emily Mansur to the position of head volleyball coach.

Mansur (pronounced Man-sore) was elevated to the top spot after serving as an assistant coach last season and having been the interim head coach since early March.

“I am proud to announce that Emily Mansur has been named the head volleyball coach at Hofstra University,” commented Hathaway. “While serving as our interim head coach over the last two months, Emily has shown a great ability to connect with our current student-athletes and we look forward to her further enhancing a program that represents Hofstra University well in the classroom, on the court and in the community. Combining Emily’s high-level playing career, along with her extensive coaching resume, make her a great choice to lead our program. Emily has a vast amount of recruiting contacts, both in the United States and internationally, that will assist in the growth of our program. In addition, I am also excited about how Emily has connected with the Hofstra Volleyball alumnae base, and has embraced how important they and their past successes are to the future of the program.”

“Words cannot express how excited I am to become the head coach of the Hofstra Volleyball program,” stated Mansur. “This is a program steeped in tradition and I am honored to be selected to lead such a successful and well-respected volleyball team. We will continue to represent this great University well both on and off the court and I look forward to many outstanding and rewarding years ahead for the Pride. I would like to thank Hofstra President Stuart Rabinowitz, Vice President and Director of Athletics Jeffrey A. Hathaway and members of the committee for putting their trust in me to lead this amazing program.”

A graduate of Iona College, Mansur joined the Hofstra staff after spending the previous season as an assistant coach of the professional-level Lusofona Volleyball Club. She returned to the college game with extensive experience coaching club teams as well as serving as an assistant coach for one season (2006) at Marist College.

Mansur was an assistant coach for two Lusofona Volleyball Club teams based out of Lisbon, Portugal. Of the two, one was a professional level team in which she was responsible for developing the team’s setters. She was also the assistant coach for Lusofona’s 18’s team, which qualified for the Portuguese Final Four. In addition to leading the practices for setters and middles, Mansur also assisted players trying to attract the attention of professional teams.

Prior to coaching in Portugal, Mansur worked in the corporate world as the general manager and compliance officer at Multitransfers LLC from 2007 to 2012.

Mansur began her coaching career at Marist in 2006 where she took part in practice and conditioning plans, assisted in scouting of opponents and in-game strategy and was also responsible for game filming.

A two-year captain for the Gaels from 2003 to 2004, Mansur was a four-year starter as a right side and outside hitter, and setter. She was named to the all-conference first team in the Metro Atlantic Athletic Conference (MAAC) in 2003 and 2004 while earning the MAAC Setter of the Year Award in 2004.

Mansur has also played on many club teams including those based out of New York, Brazil, and Germany. Most recently, she played for the Creole Volleyball Club in New York City in 2004, 2005, 2008 and 2012.

Mansur is also the owner and director of Club Asics Long Island (CALI), one of the top club volleyball programs on Long Island.

Mansur, who is fluent in Portuguese and English, graduated from Iona in 2005 with a degree in psychology.