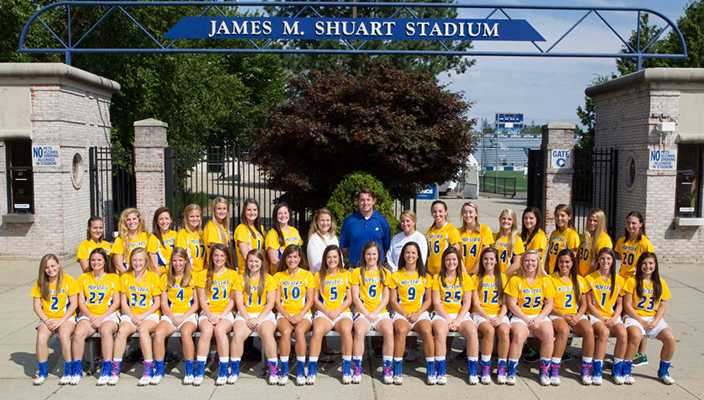 The Hofstra Women’s Lacrosse team will make its eighth appearance in the Colonial Athletic Association (CAA) Championship this week as the Pride earned the fourth seed and will face top-seeded Towson on Friday at 5 p.m.

The entire tournament will be played in Williamsburg, VA on the campus of the College of William & Mary. James Madison and Delaware make up the rest of the field for the Championship and will meet following the game between the Pride and the Tigers.

WRHU (88.7 FM) will broadcast all of the Pride’s games in the tournament. Dan Savarino and Anthony Santaniello will have the call and the broadcasts will be available 30 minutes prior to the first draw control. The audio only broadcast will available on GoHofstra.com, GoHofstra mobile app, WRHU.org and WRHU mobile app.

Both semifinal games and the championship final of the CAA Women’s Lacrosse Championship will be videostreamed live for free in high definition on CAA.TV and CAA’s iPad app. A free login will be required to view the games via CAA.TV on a computer or using the CAA’s iPad app.

It was an exciting end to the regular season for Hofstra as the Pride needed to win its regular season finale at Drexel on Saturday to earn the fourth and final berth in the conference tournament. Faced with a must win situation, the Pride never trailed and easily defeated the Dragons, 10-2, to earn their eighth win of the season.

Hofstra (8-9, 2-3) heads to the CAA Championship looking for its third-ever NCAA Tournament appearance and its second-ever CAA title. The Pride won its only CAA title in 2007 and have earned NCAA Tournament berths in 2001 and 2007.

Towson won this season’s matchup with Hofstra by the score of 9-5 as the Tigers scored the first five goals of the second half after the game was knotted at two at the break.

The Tigers lead the all-time series with Hofstra, 20-13. The squads met in last season’s CAA title game as Towson won that contest after the Pride had won the regular season meeting in 2013.

The contest will feature several of the top players in the entire league as Hofstra’s duo of junior attacker Brittain Altomare and junior defender April Iannetta have done it all for the Pride this season. Towson counters with the conference’s top two scorers in Andi Raymond and Ashleigh Rohrback.

In the other semifinal, James Madison will bring a 10-6 overall record and a 4-1 conference mark against a Delaware team that went 10-6 and 3-2 in league play.

The winners of the two semifinals will meet in the championship game on Sunday, May 4 at 1 p.m.