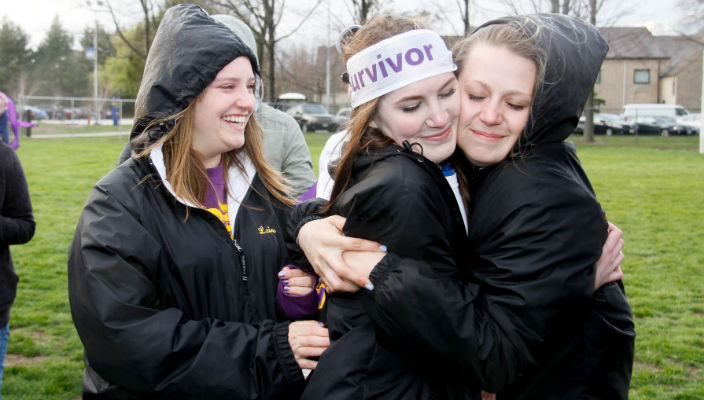 Hofstra’s Relay For Life event this weekend raised $83,000 for cancer research, the most among all colleges and universities on Long Island that participated in the fundraiser this year.

Despite chilly temperatures and heavy rain at times, hundreds of Hofstra students, staff, and community members including cancer survivors and caregivers walked tirelessly around a makeshift track on the intramural field beginning at 6 p.m. Saturday until the next morning.   Funds raised during the event benefit the American Cancer Society.

Taylor Cary (pictured above, center), a junior studying legal studies in business, delivered a heartfelt speech about beating acute lymphoblastic leukemia and participating in Relay because she looks forward to “when cancer won’t hurt anyone anymore.”   After her speech, her Delta Phi Epsilon sorority sisters ran to embrace her.

“The 2014 event, more so than any other Relay we’ve had so far, truly demonstrated Hofstra’s commitment to the cause and all it represents,” said Kimberly Wilkens ’15, co-chair of Hofstra’s organizing committee.  “Despite the rain and cold, we relayed 12 hours and not only managed to raise an impressive amount, but we also proved that nothing will stop us in the fight against cancer.”

Last year, the Hofstra event raised $111K, coming in third in Nassau County and among the top five in New York City.

Check  out more photos from Relay For Life!

Czech-ing In with the European Odyssey
May 8: Undergraduate Research Day