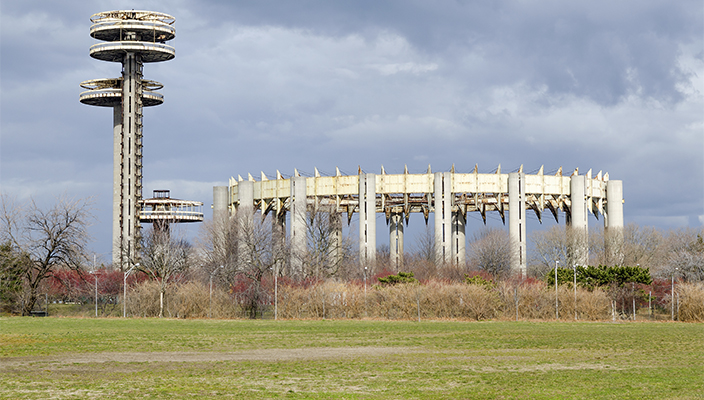 This opinion piece was written by Sociology Professor Gail Satler, a longtime Queens resident and expert on architecture’s impact on culture.

April 22. 2014 marks the 50th anniversary of the opening of the World’s Fair held in Flushing Meadows, Queens.  This has sparked discussion of what will become of one of the few remaining structures of that event – the Tent of Tomorrow – which housed the New York State Pavilion. This debate is not new and the options seem to reflect more a mindset of the past than the present or future – that is to either tear it down or renovate it to what it once was.

Designed by Phillip Johnson, the Tent of Tomorrow epitomized mid-century modern in style and reflected a futuristic perspective that was a mindset of the 1950s and 1960s and an ethos that is at the core of American culture.  For myself and all those who attended the World’s Fair, it was a place to embrace ideas and engage with people from all over the world.  Some of the structures indeed looked as if we had entered the future or other nations in a non-threatening, indeed, a welcoming way. It was transporting spatially and temporally; and it was fun, sociable and educational.

The idea of having nations and cultures and people come together to exchange ideas and interact was and is magnificent and should be permanent in mindset and intention. Few will argue with the idea of building spaces for such outcomes. Since the Fair we have focused on building such sites in the digital/ virtual world – an idea that was also present in 1964/5. But the idea is also taking place in real time – on the streets of Queens, now the most ethnically diverse borough of the city and perhaps the nation. It is a World’s Fair in its own right, and daily life is reifying this idea in the shadow of a symbol of this grander and universal hope.  So the question of what to do with past symbols can become one which considers a way to bridge a local site with a global idea as we understand it today, rather than holding fast to how it existed half a century ago. That is embodied in the notion of sustainability.

A few weeks ago, architecture awarded its prestigious Pritzker Prize for 2014  to Shigeru Ban. Born in Japan and educated at The Cooper Union here in New York, his work and perspective embody what can reframe this discussion and honor the intention of a World’s Fair and our city. Mr. Ban builds for those who have little money and often no voice and uses materials that are recyclable and inexpensive, e.g. cardboard, cargo containers. He has built many temporary housing units for those displaced by natural or manmade disasters and notes that labels of temporary or permanent are more about use and care than materials. Most importantly, he has said that what architecture needs is more love; that is, if we care for what we build and for those who inhabit it, it does gain a type of permanence.

With this in mind, we can consider whether the ideas put forth by the Tent of Tomorrow and the World’s Fair may be revitalized and reimagined in the current structure – it could. The Highline was also viewed as a relic of a time past until some with new vision and care for what was needed in the present reversed the years of neglect and reworked it into the current fabric of the neighborhood and the city. The Tent could become an experiment in vertical farming and dining. Farm to table could take on new meaning as research expands to help feed people the world over. The footprint of the past could be woven into the current space and mindset (hopefully one more forward-thinking).

There are many like Ban with the imagination and conscience to offer options that reflect present-thinking about tomorrow and once again transports its audience.

If the tent is torn down, will what replaces it be given any more care or to use Ban’s term, “love”?  If not, whatever is built will not only be temporary and so will its intention. Then tomorrow will offer nothing really new or hopeful, just another relic that looks to the past rather than the present and future.