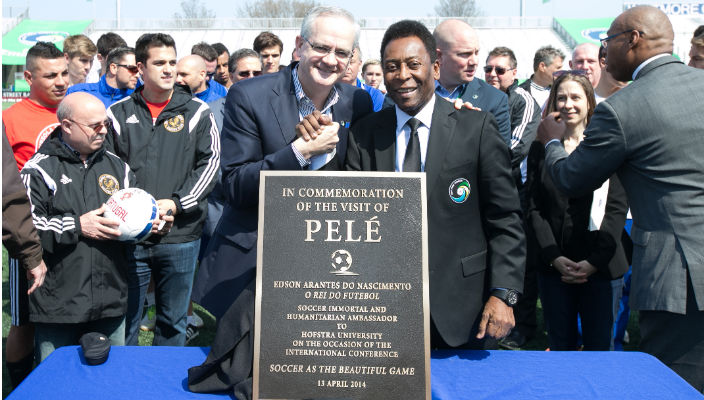 More than 300 scholars, journalists, and fans from 25 countries, convened at Hofstra University this weekend to examine the economic, political and social impact of soccer at the largest international academic symposium assembled about the sport in the United States.

Among the highlights of the conference,“Soccer as the Beautiful Game: Football’s Artistry, Identity & Politics”, were the awarding of an honorary degree to the legendary soccer player Pelé at John Cranford Adams Playhouse, and the unveiling of a plaque commemorating his visit and the conference at James M. Shuart Stadium. The plaque will be permanently located at the Hofstra Soccer Stadium. More than 1,000 people attended the honorary degree ceremony.

Pelé is the honorary president of the New York Cosmos, the team he led to a championship almost 40 years ago. The Cosmos are the reigning 2013 NASL champions and play at Shuart Stadium.

Check out photos from the soccer conference

On Sunday, just before the plaque ceremony, Pelé signed autographs for dozens of Long Island children who had attended a youth soccer clinic at the stadium, sponsored by Hofstra University, the New York Cosmos and the Long Island Junior Soccer League. The clinic was run by members of Hofstra’s men’s and women’s soccer teams.

Cover photo: Vice President and Director of Athletics Jeffrey A. Hathaway (R) with Pelé  at the ceremony unveiling the plaque commemorating the soccer conference at Pelé ‘s visit.