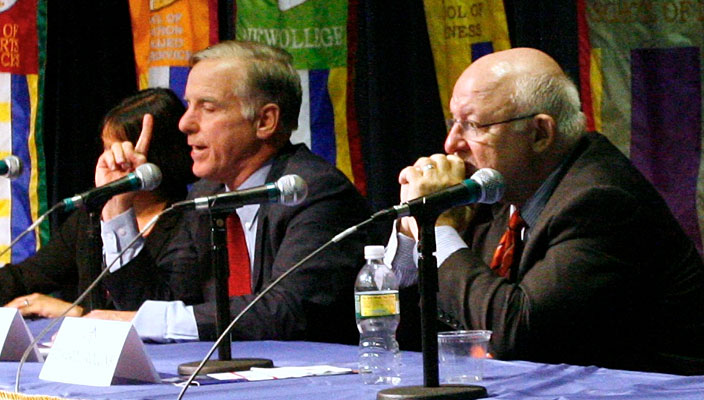 The panel, “What’s at Stake for Washington in 2014? An Early Look at the Midterm Elections”, will be held 11:10 a.m. to 12:35 p.m. in the Student Center Theater, North Campus. Admission is free and open to the public. It will be moderated by Meena Bose, a political science professor and director of the Kalikow Center.

The panel is the third Kalikow Center event of the semester featuring Dean and Rollins, who have been senior presidential fellows at Hofstra since 2009. Previous panels focused on President Obama’s foreign-policy leadership and second-term challenges.

Dean, former governor of Vermont, was chairman of the Democratic National Committee from 2005-2009. He ran for president in 2004. Rollins is a Republican strategist who is a veteran of four presidential administrations and 10 presidential campaigns, including two tours as Assistant to the President.

Julie Mason is host of Press Pool, which can be heard weekdays from 3-6 pm on SIRIUS XM’s POTUS Channel. Before the launch of her radio show in 2011, she covered the White House for the Houston Chronicle, the Washington Examiner and POLITICO. She is a former elected board member of the White House Correspondents Association, and winner of a 2014 Gracie Award for outstanding host of a national news show.