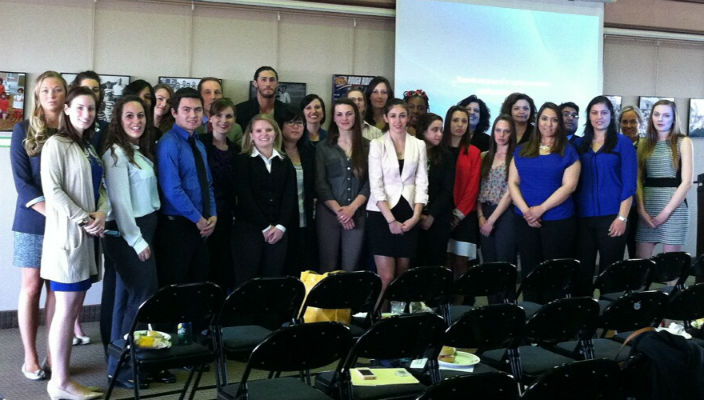 Since March, five teams of three to five students each have been researching and creating proposals that would help reduce obesity rates in children living in nearby Roosevelt, NY, where 48 percent of middle school students are either overweight or obese, compared to the national average of 32 percent.

“I wanted to be part of this experience because it represents a real-life approach to solving problems,” said economics major Emilie Yonan ’15, whose team took first place with its idea for an after-school program that would incorporate nutrition workshops, physical exercise, and civic engagement activities where Roosevelt teens would interact with college students.  She and her teammates, health science majors Catie Moulton and Warren Berlin, law student Aileen Iorio, and psychology major Leigh Hunter, worked under the guidance of Martine Hackett, assistant professor of health professions.

Second place went to a team of five students representing majors in philosophy, health science, speech-language-hearing sciences, and the graduate program in health administration, whose “Hofstra’s Kids” proposal would assign Hofstra students as one-on-one mentors to encourage a more active lifestyle.  Students on all teams studied aspects including evidence-based research, pending legislature, funding, and sustainability in formulating their plans.

Members of the winning team each won a $250 gift card, while the second-place team won $100 each.

“Innovation isn’t just in technology,” said Pascale Frederique ’15, a public-health graduate student and member of the campus Society of Public Health Advocates, who helped organize the event.  “People in all disciplines – health care, finance, communication – all have to work together to bring about creative and effective solutions.”

The presentations were judged by a panel of four: Clara Guillens Eromosele, director of the Roosevelt Community Revitalization Group, Vanessa Farrell of Robert Wood Johnson Foundation, Executive Dean Lawrence Levy of the National Center for Suburban Studies at Hofstra University, and Charles Schleien, MD, chair of the pediatrics department at Cohen’s Children’s Medical Center, who noted that it was “spectacular” to see such a large group of students volunteer to participate in the competition.

In addition to Professor Hackett, other faculty advisors included Katie Sell, Michael Ludwig, Corinne Kyriacou, and Sarah Novak.  Participating students and advisors represented the School of Health Sciences and Human Services, the Hofstra College of Liberal Arts and Sciences, the School of Education, and the Maurice A. Deane School of Law.