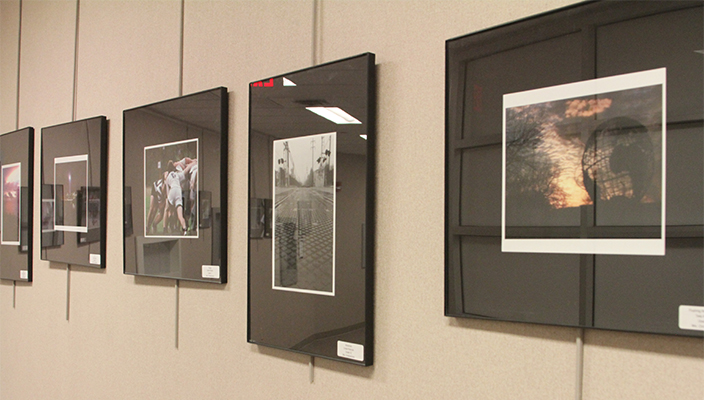 A partnership and friendship between Hofstra University Art Education Professor Susan Zwirn and her former student, West Hempstead High School art teacher Evangeline Christodoulou (MSEd ’05), has produced an impressive exhibition of photography on the Hofstra campus. All the works on display were taken by Christodoulou’s students – 10th, 11th and 12th graders – with many of the pieces inspired by a single “word of the day.”

The framed works are spread out over the first floor of Hagedorn Hall, home of Hofstra University’s School of Education. Dr. Zwirn sees the exhibit as an important opportunity to demonstrate the impact art education has on young people and the creativity it inspires.

Christodoulou says, “I feel that photography helps students learn how to express themselves visually and literally. They learn how to look at things in very different ways. There is also the pure joy they feel when they create something beautiful and interesting.”

Christodoulou explains that many times at the start of class, she’ll give her students a word and then send them on “an adventure” to photograph that object – but not in an obvious way. For example, one morning Christodoulou had cupcakes for her students. By the time she gave her class the word of the day, many students had already eaten their subject matter. Still, the students were expected to find a way to feature a cupcake in their photo – and this generated some interesting perspectives. One such example is on display at Hofstra, featuring remnants of pink icing and crumbs left behind on the baking tin.

Before becoming a teacher eight years ago, Christodoulou was a graphic designer. “Everything I learned about education I learned from Susan [Zwirn],” she says. Dr. Zwirn invited Christodoulou to present her one of her research papers at the annual conference for the National Art Education Association, and she’s been presenting at trade conferences ever since then, sharing the importance of art education in public schools.

The West Hempstead HS exhibit will be on display through Monday, May 5, 2014. Many of the works also feature a QR code which, when scanned, will reveal the artist’s statement.