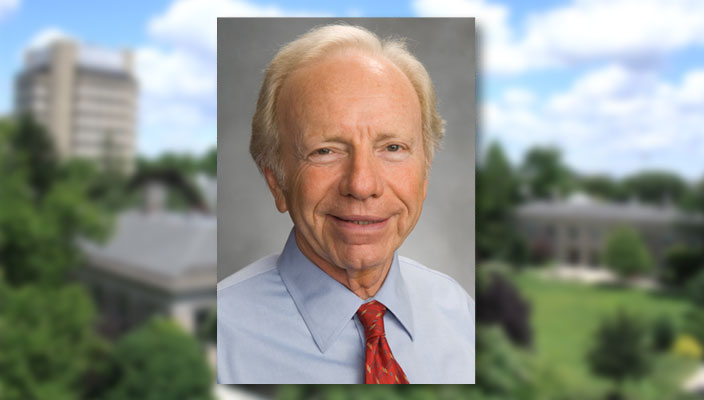 Former Democratic vice-presidential candidate and U.S. Senator from Connecticut Joseph Lieberman, who is known for working across party lines and later became an independent, will deliver the 2014 Donald J. Sutherland Lecture on Thursday, April 3, 2014 from 11:15 a.m. to 12:45 p.m. at the John Cranford Adams Playhouse.

Lieberman’s address, “The Case for American Engagement in a Dangerous World”, comes amid escalating tensions over Russia’s annexation of Crimea, including U.S. sanctions against Russia to prevent further incursions into Ukraine. The lecture is sponsored by Hofstra College of Liberal Arts and Sciences, the Department of Political Science and the Peter S. Kalikow Center for the Study of the American Presidency.

Admission is free and open to the public, but registration is suggested. The event can also be viewed live, online.

He served four terms in the Senate, three terms as a Democrat and his last as an independent, retiring in January 2013. He ran for vice president as a Democrat in 2000, becoming the first Jewish candidate on major political party presidential ticket.

“Joe Lieberman has played a key role in the nation’s politics for more than two decades. He is that rare elected official who is both deeply principled but able to seek consensus,” said Dr. Richard Himelfarb, PhD, a political science professor who helps organize the annual Sutherland Lecture. “He’s a patriot who has devoted his life to public service. These qualities, along with his reputation for kindness and decency, make Joe Lieberman an exemplary choice to deliver the Sutherland Lecture.”

The Sutherland Lecture is named for the former trustee who endowed the annual event. This year’s lecture is also co-sponsored by the Office of the Provost and the Office of University Relations.