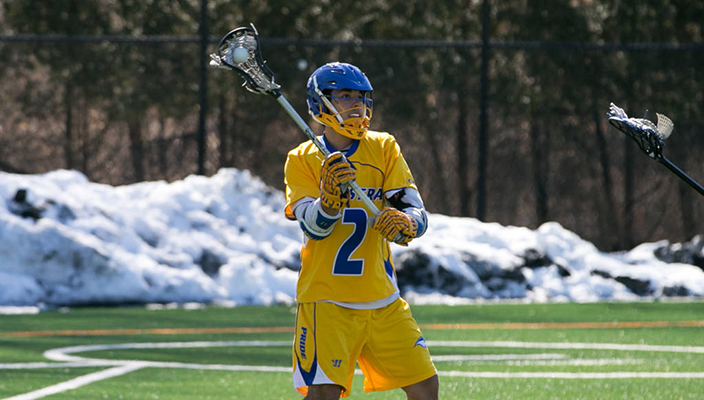 The Hofstra Men’s Lacrosse team begins their second four-game homestand of the 2014 season this Saturday, March 29 when the Pride host the Towson Tigers in a Colonial Athletic Association contest at James M. Shuart Stadium. Game time is 7 p.m.

Saturday’s game will be aired on WGCH-AM (1490) with Mike Sullivan and Nick Valastro calling the action beginning with the pregame show at 6:30 p.m. The game can also be viewed and heard worldwide on the internet in the PRIDEZONE at GoHofstra.com.

Tickets for the contest can be obtained online at GoHofstra.com/tix or by calling (516) HOF-TIXX (463-8499). Individual game tickets are priced at $16 for reserved (chair-back) seats, $10 for adult general admission and $6 for youth under-12 and senior citizen general admission.

Hofstra (5-3, 2-0), ranked 19th in the Warrior Lacrosse Media Poll this week, is on top of the CAA standings following their 11-9 victory at Drexel last Saturday. Senior midfielder Drew Coholan recorded a career-high five goals, senior attackman Lance Yapor added two goals and two assists and sophomore Sam Llinares chipped in with one goal and three assists to lead the Pride. Senior Torin Varn also tallied two goals and junior Chris Selva made a season-high 13 saves, including 10 in the first half, for Hofstra. After trailing 8-4 in the third quarter, Drexel scored four unanswered goals to tie the game at the 8:44 mark of the fourth quarter. But Coholan scored three consecutive goals to put the Pride up for good. The Pride is 2-0 in CAA action for the first time since 2009.

Towson is led in scoring by senior midfielder Thomas DeNapoli with 14 goals and 13 assists. Junior middie Greg Cuccinello has posted 13 goals and five assists while freshman attackman Joe Seider has added 13 goals and three assists. Senior Max Siskind has tallied 10 goals and one assist, freshman Ryan Drenner has recorded nine goals and nine assists and junior Justin Mabus has four goals and is tied with DeNapoli with 13 assists. Sophomore Tyler White has recorded a 9.28 goals against average and a .497 save percentage with 81 saves in nine games this season.

Saturday’s game is the 45th men’s lacrosse meeting between Hofstra and Towson in a series that started in 1961. Hofstra holds a 24-20 series lead and has won four of the last six and six of the last nine contests. The two teams last met on March 30, 2013 in Towson with the Tigers posting a 7-6 victory over the Pride.