I made the pledge almost three years ago.  If the Hofstra fundraising effort, organized by our Roller Hockey team raised $25,000 I would agree to have my head shaved.  At the time I made this commitment, the fundraising efforts were in the low teens and my hope was to help get that total much closer to $25,000.  In 2012, the total was about $18,000.  Last year it was slightly lower and so I renewed my commitment this year with the same total as the goal.  The effort seemed to me to be more focused and so I felt confident that we could easily break the $20,000 barrier and I especially liked the idea of $24,990.  Easily a new record but not requiring my hair in return.

As the Wednesday deadline approached, I was getting almost daily reports on where we were.  On Friday we were above $20,000. By the end of that weekend, we were at $23,000.  By Monday at 11 AM, we exceeded the $25,000 level, and on Wednesday, when our St. Baldrick’s day was scheduled, we exceeded $33,000.  My hair was a goner.  I immediately ordered a hat for myself and paid for rush delivery. The weather forecast was for cold weather and walking around with no hair was going to be a new sensation for me. I also made a contribution to St. Baldrick’s.  I was waiting so that my contribution wouldn’t count toward the total.

I finally told my kids on Tuesday.  My older daughter had already been asked by a friend’s mom, who also works at Hofstra, whether I was serious about actually getting my hair cut.  My younger daughter was horrified.  Her suggestion was that I give all the money myself but under no conditions should I allow my head to be shaved. The next morning when I combed my hair, I felt a slight twinge of trepidation.  I was still hoping to eat my cake and have it too but I knew that was unlikely. Nevertheless, the thought that we had set a new fundraising record did please me. Helping to eliminate childhood cancer and ultimately all cancer is a goal that absolutely needs to be accomplished.  The time for the haircut was 11:15AM and I left my office with friends and colleagues at 11:10AM.  There was an overflow crowd when I arrived at the Student Center Courtyard.  The numbers were impressive and the enthusiasm was also terrific.  Not only was I getting my head shaved there were over 70 additional students, faculty, and other members of our community who were also getting the on-top shave.  A few opening remarks and it was done.  Very quickly, painlessly, and for me with a real sense of satisfaction that I had helped something good happen.

As I think about it a few days after the event, I am even more pleased that I participated and plan to do so again next year (though the goal will have to be adjusted upward to above $45,000 so that there is a new fundraising record, hopefully in the making).  My younger daughter, by the way, is still horrified.  She asked me if there is a pill I could take to speed by the hair growth. She, I believe, is looking for me to be the equivalent of a Chia Pet so that she could just sprinkle my head and magically in a few days, a robust head of hair would return.  On some level, I would probably prefer that as well.

My leadership role is in the academic area but the reality is that we have the opportunity to help lead in many ways.  For a minor investment of my hair (as well as a new hat), I’m glad I was able to make a difference. 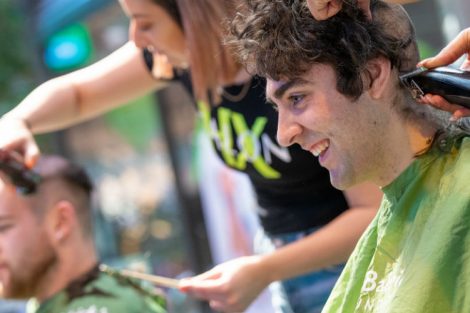 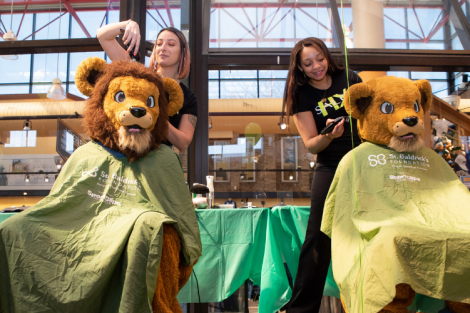 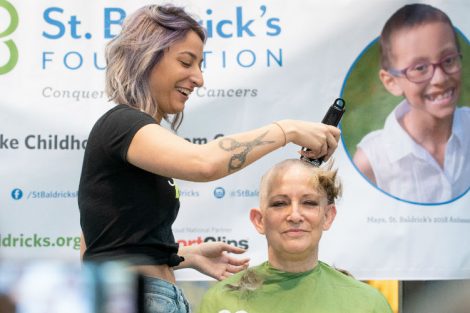