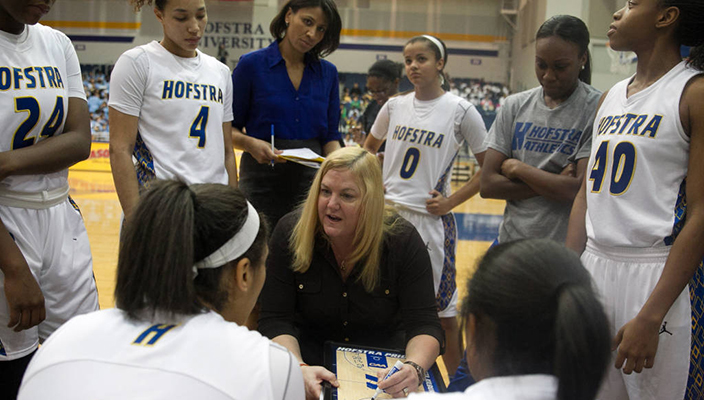 Riding a three-game winning streak, the Hofstra Women’s basketball program will enter the Colonial Athletic Association Championship as the fifth seed and will take on fourth-seeded Drexel in the quarterfinals on Friday at 2:30 p.m. from the Show Place Arena in Upper Marlboro, Maryland.

Live video of the matchup can be seen on CAA.TV. For live audio, visit the PRIDE ZONE on GoHofstra.com, the GoHofstra Mobile App, WRHU.org and locally on WRHU- 88.7 FM. The pregame show will start at 2 p.m.

Hofstra is 28-34 in the all-time series, including down-to-the-wire wins this season. Both victories came in the final minute as freshman Krystal Luciano hit a driving layup in a 68-66 win in Philadelphia on Feb. 2. Elo Edeferioka’s free throw helped Hofstra come away with a 60-58 home win over Drexel on March 2.

Despite the plethora of meetings in the team’s long history together, the matchup in this years’ CAA Tournament quarterfinal will mark the first time the schools have faced off in a conference tournament since the 1999-00 campaign when the schools were members of the America East. Drexel won that game, 70-62.

Senior forward Anma Onyeuku enters her last CAA Tournament as the Pride’s leading scorer at 11.7 points per game and second in rebounds with 6.5 per contest. The Fayetteville, Ga. native has finished in double figures 20 time this season, including the last four games entering the tournament. Five of her seven career double-doubles have come in her last collegiate campaign.

Fellow senior Annie Payton is second on the team with 11.5 points per game. The guard has five of Hofstra’s 11 20-point efforts, including a career-high 27-points against the College of Charleston on Feb. 16.

A youthful roster has complemented the two impact seniors. Edeferioka set a Hofstra season-high with 17 rebounds in the regular season finale versus NJIT. Edeferioka is the team’s leading rebounder at 7.4 boards per game while averaging 6.3 points.

Besides having a fresh look in the post, the Pride has been guided by a first-year point guard in Luciano. The freshman from San Juan, Puerto Rico is averaging almost 3.5 assists while scoring 5.8 per game. Luciano has led the team in assists in 12 games and is a workhorse who is averaging 25.8 minutes. Sophomore Asia Jackson ended the regular season on a high note with 17 points against the Highlanders. Jackson has reached double figures in scoring in seven contests this season.

Defensively, Hofstra has not allowed a team to reach the 50-percent field goal shooting mark this season and has opponents to less than 40 percent shooting on 17 occasions. The Pride has allowed 65 points or fewer 16 times.

Drexel won last season’s WNIT championship and clinched the fourth seed in this year’s CAA Tournament. The Dragons rebounded from a loss at Hofstra to end the regular season with a 82-40 trouncing over Towson at home. Rachel Pearson is the only Drexel player averaging in double figures at 10.5 points per game.

Payton averaged 14.5 points against the Dragons with freshman Kelly Loftus notching an average of 10 points and 5.5 rebounds in the two meetings against the Dragons. Hofstra held Drexel to a collective 39.1 percent field goal shooting percentage in the meetings. The Pride put in clutch performances at the free throw line in the season series with Head Coach Krista Kilburn-Steveskey’s squad finishing 28-for-36 (77.8 percent). Edeferioka put in two strong all-around games and posted averages of eight points and eight rebounds in her first two career games against the Dragons.