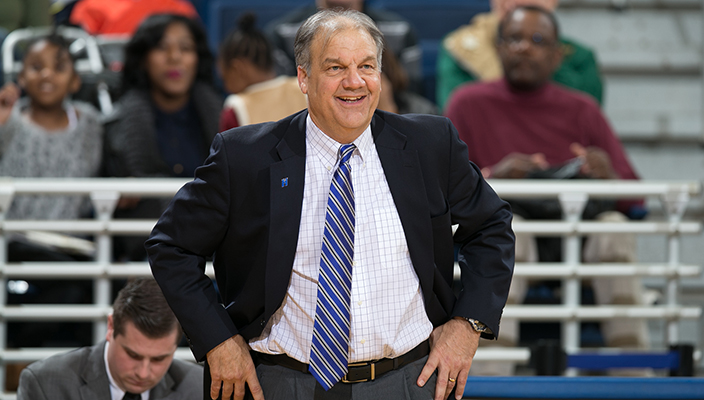 Hofstra and UNCW will be the “lid lifter” for the CAA Tournament as Friday’s game will be the only one played that day with the winner advancing to Saturday’s quarterfinals where the victorious squad will face top-seeded Delaware at noon.

Live video of the first round game between the Pride and the Seahawks can be seen on CAA.TV with Scott Klatzkin and Blaine Taylor on the call.

For live audio, featuring Rob Joyce, Mike Sullivan and Mark Prussin, visit the PRIDE ZONE on GoHofstra.com, the GoHofstra Mobile App, WGCH.com and locally on WGCH 1490 AM. The pregame show will start at 6:45 p.m.

Hofstra (9-22, 5-11 CAA) captured both games against UNCW this season as the Pride won 69-64 down in Wilmington on January 15 before completing the regular season sweep with a 61-52 victory in Hempstead on February 8.

The Pride will be the No. 8 seed in Friday’s game, while UNCW is the No. 9 seed.

The first game saw graduate forward Zeke Upshaw pour in a game-high 27 points, including tying the school record with seven three-pointers, to help Hofstra hold off a possible Seahawk rally in the second stanza.

In the rematch in early February, Hofstra placed three players in double figures as Upshaw led the way with 16 points, while sophomore forward Jordan Allen totaled 15 points and nine rebounds and graduate guard Dion Nesmith added 13 points and five assists to allow the Pride to earn the nine-point win.

In the two games against UNCW this season, Upshaw led Hofstra with 21.5 points, while Allen was second with 12.5 points and 7.0 rebounds per outing.

Hofstra has been led offensively all season by the trio of Upshaw, Nesmith and freshman guard Jamall Robinson. Upshaw leads the way with 19.6 points per game and has drained 84 three-pointers as well. That total ranks as the third-most in a single season in program history. Upshaw also ranks second in the CAA in scoring this season.

Nesmith, who will be returning for another season in 2014-15, is second on the squad with 13.2 points and leads the way with 119 assists. He ranks second in the conference in assists per game.

Robinson, the first true freshman to start every game during the regular season since current staff member Craig “Speedy” Claxton started all 27 games in 1996-97, averaged 9.6 points and chipped in with 4.3 rebounds in 31 games during his solid rookie campaign. Robinson and Upshaw are the only members of the team to start all 31 games this season.

UNCW enters Friday’s encounter with Hofstra with an identical 9-22 overall mark, while finishing the regular season with a 3-12 conference record.

Cedrick Williams leads UNCW in both scoring and rebounding with averages of 11.8 and 6.7, respectively. He is the only member of the Seahawks to average double digits in scoring as Addison Spruill is second in scoring with 9.5 points per outing. Tanner Milson, who scores 5.5 points per game, is UNCW’s top long-range threat as he has hit a team-high 44 three-pointers this season.

Hofstra leads the all-time series with UNCW, 15-14. The series began when the Pride joined the CAA in 2001-02. The highly-competitive series has seen Hofstra win each of the last three meetings between the teams. The Seahawks won the first eight meetings before the Pride earned its first win with a 74-68 victory in Hempstead during the 2004-05 season. Hofstra has won 10 of the last 12 meetings in the series.