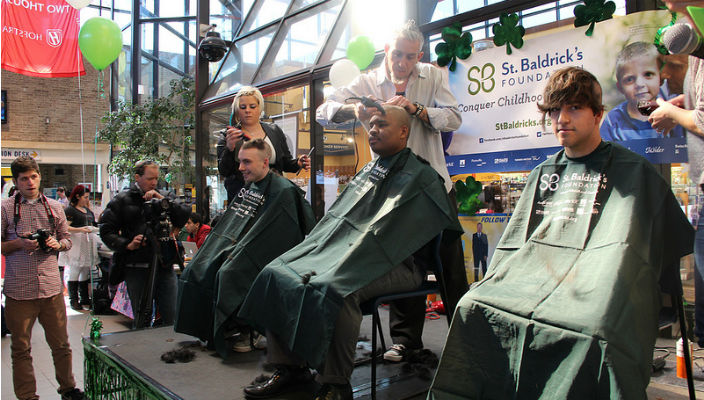 Hofstra will host its sixth annual St. Baldrick’s Day Event on Wednesday, March 12 to raise funds for children’s cancer research.  Students, faculty and staff set goals to collect a certain amount in donations, and agree to have their heads shaved publicly in the Student Center if those goals are met.

The campus community has already raised more than $25,000, meeting a challenge from Hofstra Provost and Senior Vice President Herman Berliner who will now, for the first time, go under the clippers.

This year’s event highlights the importance of cancer research as faculty and students rally behind one of their own: Andrew Fierstein, a first-year health science major in Honors College, has battled Ewing’s sarcoma, a rare form of bone cancer, since the age of five. Medical complications forced him to end this academic year early, but he hopes to return in September.

Andrew will attend the event to watch Honors College Associate Dean Neil Donahue shear it off in his honor.  Dean Donahue is the captain of the Friends of Andrew Fierstein team, which is still open for new participants and donors.   This is Dean Donahue’s third year participating in St. Baldrick’s; in past years, he has participated in honor of his 10-year-old niece, Lisa, who lost her battle with brain cancer.

The shaving of heads is meant to show solidarity with children who often lose their hair from chemotherapy.  Last year, more than 50 faculty, staff and students had their heads shorn, raising over $17,000 for the St. Baldrick’s Foundation [see pics].

All donations to Hofstra individuals and teams will be counted toward the University total.  To participate, donate, or track the progress of teams such as Dean’s Donahue’s, visit the Hofstra page on the St. Baldrick’s Foundation site.