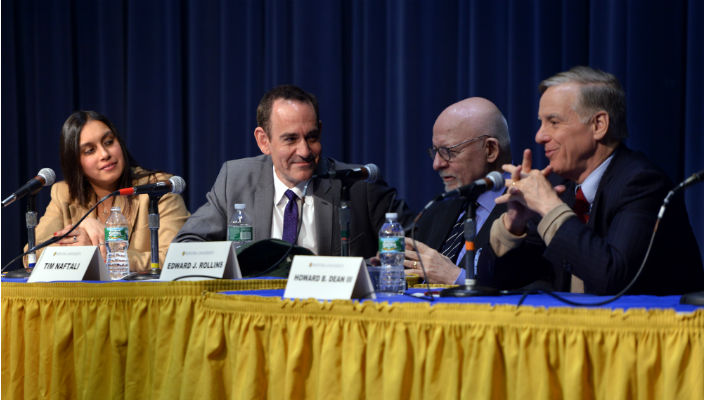 From students and staff to senior citizens, over 100 people attended a free panel discussion about the Obama administration’s foreign policy at Hofstra’s Sondra and David S. Mack Student Center. The event was the first of three talks to take place this semester sponsored by the Peter S. Kalikow Center for the Study of the American Presidency.

How is President Obama doing when it comes to foreign affairs?  Based on the spirited conversation between Hofstra senior presidential fellows Howard B. Dean III, Edward J. Rollins and  national security expert Timothy Naftali from the New America Foundation—it all depends on your perspective. The panel was co-sponsored by the International Scene Lecture Series.

The panelists were divided as to the effectiveness of Obama’s leadership and implementation of foreign policy over the years, but they agreed that the President’s approach to world affairs is based on a new system of multi-polarity.

“Obama represents a different way of looking at the world,” said Dean, former governor of Vermont, 2004 Democratic Presidential candidate, and former chairman of the Democratic National Committee.  “Because we now live in a multi-polar world, the US must allow other countries to assume leadership roles and take responsibility for what goes on in their own regions—it is a positive development.”

Although the panelists agree that encouraging countries to self-govern is critical to evolution, it may also serve to create a gap in foreign relations for America. “Obama’s intentions are correct, but his implementation has failed,” said Rollins, a Republican political strategist who managed Ronald Reagan’s 1984 re-election campaign and served in four presidential administrations. “I believe the President’s ‘loner’ style has damaged his reputation on the international front—it appears as if we don’t care about what goes on in other parts of the world.”

Political historian Naftali sees Obama’s tactic as redefining America’s role in the world and knowing when to get involved. “There are times when it is not helpful for us to be up front in the affairs of other countries,” explained Naftali. “I feel the challenge for President Obama is to pick and choose which challenges we should lead.”