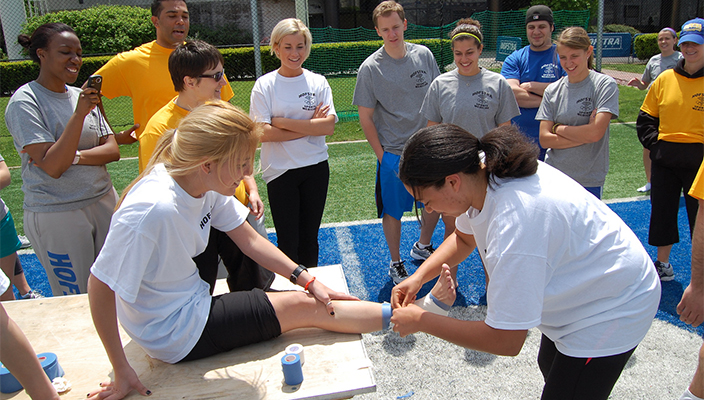 Two prestigious athletic training associations have named seniors Michelle Bandell of Hampstead, MD, and Marissa LoMonoco of Seaford, NY, recipients of their 2014 awards for academic achievement. Both students are majors in the Athletic Training Program at Hofstra University.

Michelle Bandell was awarded the Ed Abramoski Award from the New York State Athletic Trainers’ Association (NYSATA). Michelle has maintained a 3.8 GPA and been consistently named to Hofstra’s Dean’s List.  She is currently secretary of Hofstra’s Athletic Training Society. Post-graduation, Michelle has been accepted by International Volunteer HQ to travel to a village in Kenya, outside of Nairobi, to volunteer in a local school this summer 2014. She will be teaching the children about general health and well-being as well as implementing a sports education program after the school day to keep children engaged in physical activity.

NYSATA is devoted to enhancing the quality of health care for the physically active in New York State. The Ed Abramoski Award was established by the Buffalo Bills in honor of their long-time athletic trainer, who aided more than a thousand athletes with their physical training while also serving as a father figure to many players.

Marissa LoMonaco is the recipient of the Paul Grace Scholarship Award from the Eastern Athletic Trainers’ Association (EATA). Marissa is a dean’s list student who will be entering Hofstra’s MS in Health Education this fall 2014. During her sophomore year, Marissa was inducted into Iota Tau Alpha Athletic Training Honor Society for student service and for outstanding clinical performance.

EATA scholarship recipients are selected based on their grade point average, a student essay, faculty recommendations and athletic training clinical experiences, service, extracurricular activities, leadership and awards. The award is named for EATA former president Paul Grace, who also served as chairman and as the first executive director of the National Athletic Trainers’ Association (NATA) Board of Certification. He was inducted into the National Athletic Trainers’ Association Hall of Fame in 1996 and is now an executive with the National Board for Certification in Occupational Therapy.

Both Michelle and Marissa received their awards at a joint ceremony held on January 11, 2014, at the Foxwoods Resort and Casino in Mashantucket, CT.

The Athletic Training Education Program (ATEP) is a 128 credit hour program that leads to a Bachelor of Science Degree in Athletic Training. The ATEP at Hofstra is accredited by the CAATE, signifying it meets the standards required to prepare students for the Board of Certification, Inc. (BOC) Examination and a professional career as an athletic trainer.