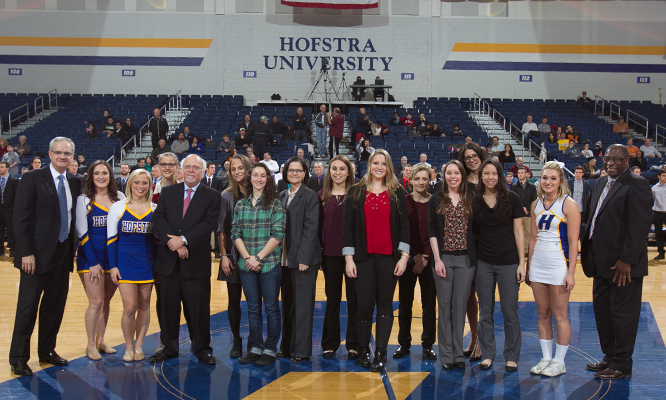 During halftime of Wednesday’s men’s basketball game between the Pride and Delaware, Hofstra honored nearly 275 student-athletes and nearly 60 spirit support personnel for their academic achievements during 2013. The group was recognized for achieving a 3.0 grade point average or better and includes 18 student-athletes, two dance team members and one cheerleader that earned a 4.0 GPA.

“The academic success of our student-athletes is our primary mission,” said Hofstra Vice President and Director of Athletics Jeffrey A. Hathaway. “These young men and women put an incredible amount of effort into their academic performance and it is important that we recognize that commitment. The Hofstra University community is proud of all those that were honored, especially the 21 students that achieved 4.0 grade point averages.”

The 18 Pride student-athletes who earned a 4.0 grade point average were:

In addition to the nearly 275 student-athletes with a 3.0 or better, 11 of Hofstra’s 17 teams compiled a cumulative grade point average over 3.0 as well. The women’s cross country team, under the direction of Head Coach Pete Alfano and Assistant Coach Tracy Koch, had the highest grade point average among all Hofstra teams with a GPA of 3.58 and was recognized for their academic efforts as well.

Hofstra also recognized the academic achievements of former men’s basketball star Loren Stokes, who completed his eligibility following the 2006-07 season. After pursuing a professional career, Stokes returned to Hofstra in September 2013 to complete his degree in interdisciplinary studies and graduated this past December.