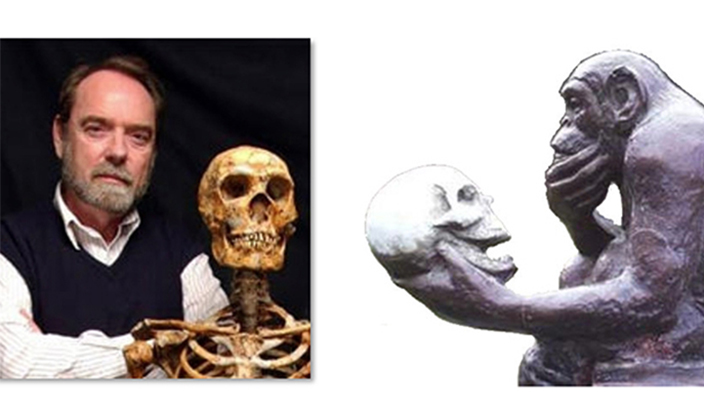 Hofstra University and the IDEAS Institute are celebrating “Darwin Day” on Tuesday, February 25, with a lecture presented by one of the world’s leading experts on human evolution.

“The Evolution of Modern Human Thought” will be presented by Dr. Ian Tattersall, curator emeritus, biological anthropology, for the American Museum of Natural History in New York City. Dr. Tattersall is also professor emeritus, Richard Gilder Graduate School, and the author of Masters of the Planet: The Search for Our Human Origins. This lecture will be presented 7:30-9 p.m. at The Helene Fortunoff Theater, Monroe Lecture Center, South Campus. Admission to the lecture is free, and it is open to the public.

For most of human history, new species of hominids can be characterized as having done more or less what their predecessors had done, if perhaps a little better.  It is only with the arrival of behaviorally modern Homo sapiens that a radical new type of human came on the scene: a hominid capable of symbolic reasoning and thought, as demonstrated by a rich archeological record of painting, engraving, carving, bodily decoration, notation, music, and elaborate burials.  Since anatomically modern humans had already co-existed with more archaic forms for several tens of thousands of years when these innovations began to be expressed, the inevitable conclusion is that an “emergent” capacity of the human brain had been acquired along with the distinctive modern anatomy, and that this new potential was only later released by a cultural stimulus.  The best candidate for a stimulus of this kind is the invention of language, with which symbolic cognitive processes are almost synonymous.

Darwin Day is an annual event, held to celebrate the anniversary of Charles Darwin’s birth in 1809, his contributions to science and also to promote all scientific achievement.