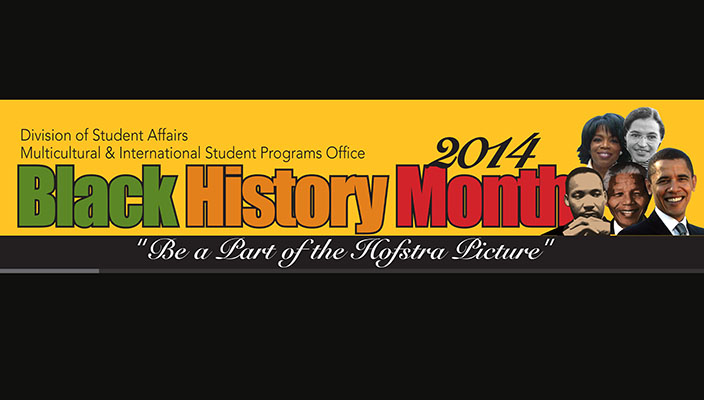 To commemorate Black History Month in February 2014, Hofstra University is presenting a series of performances, lectures, film screenings and other events. The centerpiece performance, “Up South – The Great Migration in Sound and Movement,” a concert of music and dance that recreates seminal performances and events by black artists and historical figures,  will take place on Sunday, February 9, at 5 p.m. at the John Cranford Adams Playhouse.

Tickets are $10 general admission, $8 senior citizen (over 65) or matriculated non-Hofstra student with ID. Members of the Hofstra community receive two free tickets upon presentation of a current HofstraCard. Call the Hofstra Box Office at (516) 463-6644, Monday through Friday, 11 a.m.-3:45 p.m.

For more information on other events presented as part of Black History Month, please visit hofstra.edu/events. The schedule includes:

12:45 and 3:30 p.m.: Two film viewings led by Italian Ghanaian filmmaker Fred Kuwornu. He will present two of his acclaimed documentaries and conduct a question and answer period after each screening. Presented by the Hofstra Cultural Center. Both films will be shown in the Mack Student Center Theater, North Campus. Admission is free.

*18 Ius Soli: The Right of Citizenship: The documentary film examines the difficulty in obtaining citizenship in modern Italy, particularly for those immigrants coming from North African and Sub-Saharan countries. It questions ethnicity and citizenship. Cécile Kyeng, Minister for Integration and the first “black” minister is a focus in the film. To be shown at 12:45 p.m.
*Inside Buffalo: The story of  the 15,000 soldiers of the 92nd African-American Infantry Division, who served in Italy during World War II, but that found that their contributions went unnoticed upon their return to the United States. “The Buffalo Soldiers served with courage and patriotism overcame tremendous obstacles, and paved the way for future generations.”- President Barack Obama  To be shown at 3:30 p.m.

Saturday and Sunday, February 22 and 23, 7 p.m. and 9:30 p.m.: Lee Daniels’ The Butler
Student Center Theater, Mack Student Center, North Campus
See the film (inspired by the book by Wil Haygood, who will be at Hofstra on February 25).
More information: hofstraentertainment@gmail.com or 516-463-5669

Tuesday, February 25, 8 p.m.: Lean on Me
Multipurpose Room, Mack Student Center, North Campus
A screening of the film which depicts the difficulties faced by minority students in an inner-city school
More information: lsaunders28@gmail.com