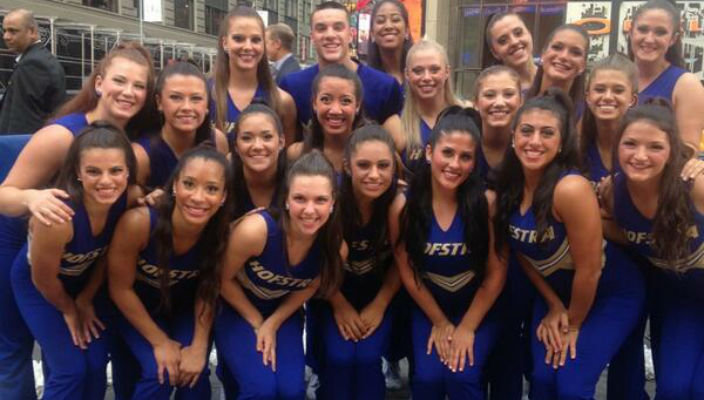 The nationally ranked Hofstra University Dance Team can add Super Bowl XLVIII to their growing list of appearances this year, as they serve as the big game’s official “Warm-Up Crew” to help freezing fans brave the cold for the big game at MetLife Stadium in Rutherford, New Jersey.

The Denver Broncos will take on the Seattle Seahawks on Feb. 2 at the first Super Bowl hosted in the New York metropolitan area and the first to be played in a cold weather climate.

“We’re not used to performing out in frigid conditions,” said Hofstra Dance Team co-captain, Gionna Cerniglia, a senior public relations major who hails from East Hanover, N.J, “but we’ll be ready no matter the weather—we’re so excited to be a part of it.”

As the Super Bowl Warm-Up Crew, Hofstra’s 20-member dance team will usher fans into the stadium with warm greetings, activities, and giveaways such as commemorative hats, mittens, and other gear to beat the freeze.

The crew will also enlist a few bold spectators to bust a dance move to win a prize —and to keep warm.  “Everyone in the stands will be psyched for the big game and it’s our job to keep their physical and mental momentum going to cope with the cold,” said team coach Kelly Olsen-Leon, a 2003 Hofstra graduate with a degree in elementary education and math. “We’re up to the excitement and the challenge.”

The dance team was recruited for the Super Bowl gig by two of their own: Tracy Petro ‘03, a Marketing Manager with the New York Jets, and Tracy Perlman ‘92, a 20-year NFL staffer who is now vice president for entertainment marketing and promotions, including the Super Bowl half-time show.

And this is not the first time the dance team got a chance to strut their stuff for the Super Bowl – in 2008, the team performed with Usher at the Super Bowl kick-off concert for the New York Giants.

“We’re so proud and honored to have this opportunity,” said Olsen-Leon. “It’s great to see our alums making such amazing strides in their lives and careers, and it’s a testament to Hofstra that our grads never forget to give back to the school that made it happen.”