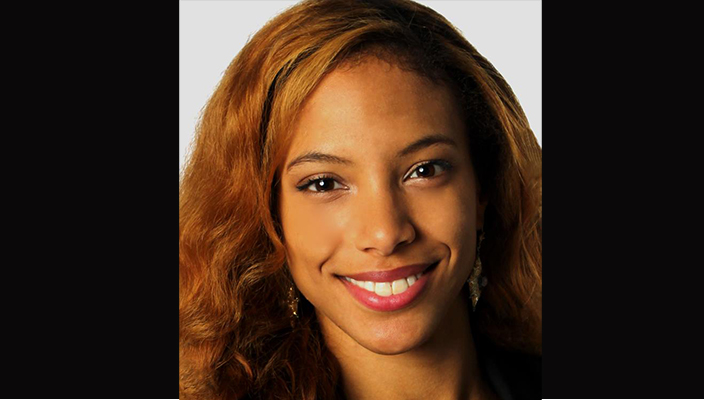 Sidney Madden, a senior journalism student, has been named a 2013/14 Ailes Rising Apprentice, winning a $10,000 scholarship and a paid summer internship with FOX News Channel.

The Ailes Rising Apprentice Program identifies and nurtures promising journalists at the college level. Created in 2011 by FOX News Chairman and Chief Executive Officer Roger Ailes, it is an extension of his longtime Ailes Apprentice Program, which awards year-long paid jobs with benefits to qualified minority journalists.

Madden, of Milton, Mass., won the award on the strength of her good academic standing, outstanding résumé and an essay.   Past Hofstra recipients include Luz Peña ’12, currently a reporter for Mundo FOX, and Claudia Balthazar ’14, a senior journalism student who was recently selected to participate in the Carnegie-Knight News21 program.

“I am so excited, humbled and grateful for this win! This is the best professional opportunity I’ve ever received,” said Madden, who is slated to work on one of FOX’s news websites and also learn production value and set building on some of the station’s prime-time shows.

“I know this program will allow me to get my foot in the door to ‘the big leagues’ of news and that’s an opportunity that is not accessible to some minorities even in this present day so I’m grateful for the chance to prove myself,” she added. “I’m honored to represent the School of Communication with this award because it has given me so much over the past four years.”

In addition to majoring in journalism, Madden has double minors in sociology and global studies.  She is editor-in-chief of Her Campus Hofstra, the local chapter of Her Campus National, the number one online magazine for college women.  She was one of two students chosen to attend the Democratic National Convention where she studied the political process and also reported for the Dallas Morning News.  In addition to internships at Cosmopolitan.com and MTV, Sidney also works at Hofstra’s online news site Long Island Report.