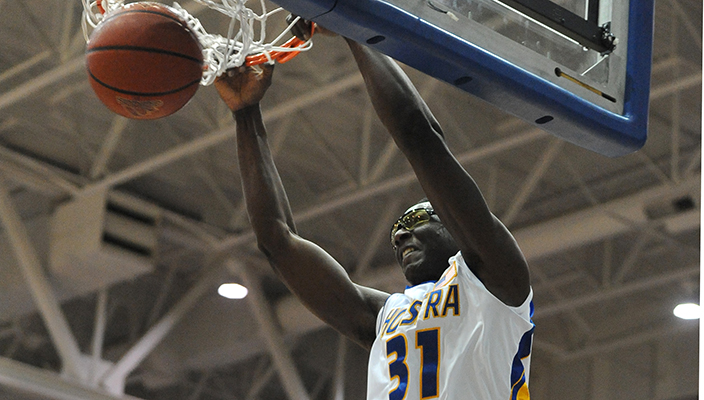 Fresh off a 77-60 win over William & Mary on Wednesday, the Hofstra Men’s Basketball team will look to continue its strong play in conference action when it hosts Northeastern on Saturday at 4 p.m.

Hofstra (7-12, 3-1 CAA) will be facing a Northeastern squad that improved to 6-14 and 3-3 in Colonial Athletic Association (CAA) play with a 57-54 victory over Towson on Wednesday as the Huskies got a buzzer-beating 30-foot shot from David Walker to catapult them to the victory.

There will be free live video/audio of Saturday’s game, courtesy of PRIDE PRODUCTIONS. The audio only broadcast, featuring Rob Joyce, Mark Prussin and Julian Coltre, can be heard via the PRIDE ZONE on GoHofstra.com, the GoHofstra mobile app, WGCH.com and locally on WGCH 1490 AM. The audio pre-game show will begin at 3:30 p.m.

Hofstra defeated William & Mary by 17 on Wednesday as graduate forward Zeke Upshaw led all scorers with 21 points and added eight rebounds, but it was the play of graduate guardDion Nesmith and senior forward/center Stephen Nwaukoni that really made the difference.

Nesmith tallied his first career double-double with 15 points and a career-high 10 assists, while Nwaukoni notched his fourth double-double of the season and the ninth of his career with 13 points and a game-high 14 rebounds against the Tribe. It was a tight contest until Hofstra used a 17-0 second half run to pull away en route to the victory.

For the second straight game, Hofstra will face one of the top players in the conference as Northeastern’s Scott Eatherton is averaging a double-double with 16.9 points and 10.3 rebounds. Eatherton ranks in the top 10 in the conference (all games) in both scoring and rebounding, including ranking second in the league in rebounds per game.

Walker, whose three-pointer gave Northeastern the huge road win on Wednesday, also averages double figures with 11.7 points per outing and leads the Huskies with 58 assists.

Following the game against Northeastern, Hofstra will head on the road to face Towson on Monday, January 27 at 7 p.m. That contest will be televised locally in the New York area on SNY. The game will also air on Comcast SportsNet Mid-Atlantic, The Comcast Network Philadelphia and Comcast Sports Southeast. It is the Pride’s lone road contest during the current four-game stretch. Hofstra is back at the Mack Sports Complex on Wednesday when it hosts Drexel at 7 p.m.

Dance Team Turns Up the Heat at the Super Bowl
Hofstra Closed on Wednesday, January 22