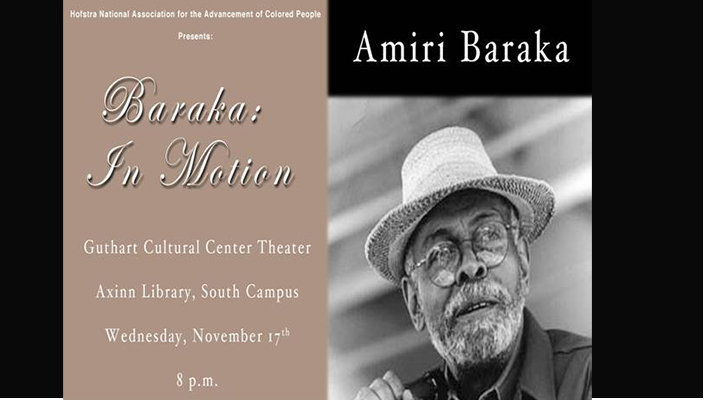 Amiri Baraka, whose career as a playwright, poet and activist spanned more than 50 years, passed away last week at the age of 79. Joseph McLaren, Hofstra University Professor of English, whose research specializes in African, Caribbean, and African American literature, comments on Baraka’s literary legacy.

Amiri Baraka, poet, playwright, novelist, essayist, and activist, passed away on January 9, 2014. He was born Everett LeRoi Jones on October 7, 1934, in Newark, New Jersey. In the 1950s, after attending Howard University and following a period in the U.S. Air Force, he became an influential voice among the Beat Generation poets in New York, including Allen Ginsberg and Frank O’Hara. He changed his name during the 1960s, and throughout his career experienced a number of literary and political phases. Baraka was also among the generation including Sonia Sanchez that defined the Black Nationalist protest statements of the Black Arts Movement, which developed its strongest political, antiracist writing in response to the 1965 assassination of Malcolm X. In Harlem, Baraka founded the Black Arts Repertory Theatre in 1965, and later in the 1970s, assumed a Marxist political perspective, renouncing a Black Nationalist stance.

A dynamic reader of his poetry, perhaps Baraka will be best remembered for his 1960s political commitment to the cause of black and oppressed people, and for such early works as the celebrated cultural analysis Blues People: Negro Music in White America (1963), The Dead Lecturer: Poems (1964), and the play Dutchman (1964). Along with his wife, Amina Baraka, he published The Music: Reflections on Jazz and Blues (1987). In later years, he continued to read publically and to produce controversial political writings as in Somebody Blew Up America & Other Poems (2003). He was undoubtedly a forerunner of slam poetry and late 20th-century rap styles.