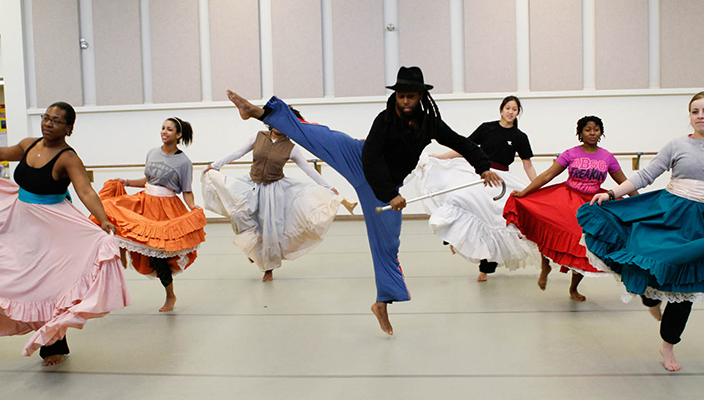 Hofstra University, Hempstead, NY …  Hofstra University presents “UP SOUTH – The Great Migration in Sound and Movement,” a concert of music and dance that celebrates the northward migration of African-Americans over the first half of the 20th century, on February 9, 2014, at 5 p.m. at the John Cranford Adams Playhouse.

A Hofstra student actor will guide the audience through a semi-historical narrative describing the exodus of millions of African-Americans from the racially oppressed, rural South seeking economic opportunities and a more inviting social environment in cities like New York, Chicago, Detroit, St. Louis, Kansas City and Los Angeles. In addition, the concert will feature a special tribute to Nelson Mandela (1913-2013).

This collaboration between the Department of Music and the Department of Drama and Dance will feature performances by the Hofstra Chamber Singers, Jazz Ensemble, Hofstra student dancers, and invited choral ensembles from Hempstead High School and Uniondale High School. Esteemed guest artists include soprano and writer Diana Solomon-Glover; choreographer Mickey Davidson; baritone Steven Herring, tenor Robert Hughes and soprano Dawn Padmore; acclaimed pianist Alina Kiryayeva, flutist and Hofstra alumna Nicole Camacho and clarinetist Medina; and conductor and pianist Frank Owens, who performed in the Broadway productions of Ain’t Misbehavin’ and Sophisticated Ladies, and served as the first musical director for The David Letterman Show on NBC.”

The first half of the concert will feature concert works, including Valerie Coleman’s Portraits of Langston for flute, clarinet and piano; and opera excerpts from Strange Fruit by Hofstra Professor Chandler Carter. The Hofstra Chamber Singers and visiting choirs from Hempstead and Uniondale high schools will sing traditional and contemporary African-American choral settings to begin the second half, and the Hofstra Jazz Ensemble, led by Frank Owens, will end the show with a Count Basie dance set choreographed by Mickey Davidson.

Tickets are $10 general admission, $8 senior citizen (over 65) or matriculated non-Hofstra student with ID. Members of the Hofstra community receive two free ticket upon presentation of a current HofstraCard. Groups of 15 or more will receive a special ticket price of $5 per ticket.  For tickets and more information, including tickets for schools, call the Hofstra Box Office at (516) 463-6644, Monday through Friday, 11 a.m.-3:45 p.m.

This concert is funded by the Hofstra Cultural Center and the D’Addario Community Music Appreciation Initiative, a multi-faceted program designed to increase knowledge and appreciation for all types of music among a broad range of young people. The initiative addresses several needs at Hofstra and in the local community, including to promote music appreciation, showcase the Hofstra Music Department and to allow Hofstra’s Music Ensembles to visit and perform in local schools and inspire children.