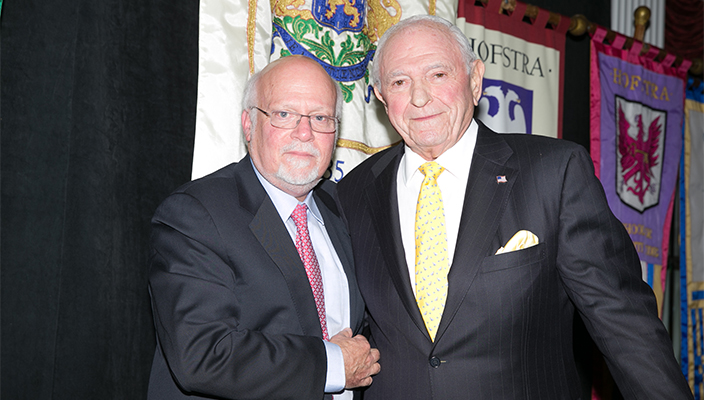 The Hofstra community is deeply saddened by the passing of Joseph G. Shapiro, 81, a devoted friend and benefactor, who was awarded the University’s Alumnus of the Year Award in September 2013.

“Joe Shapiro, along with his wonderful wife Libby, were lifelong Hofstra friends and supporters.  I am proud to call him my friend,” said Hofstra University President Stuart Rabinowitz.  “Joe was a great leader and innovator whose contributions helped shape Hofstra into the great institution it is today.  He was a generous donor who also spent time thinking about what we could do to make Hofstra a better university, while serving the larger Long Island and New York community.”

Mr. and Mrs. Shapiro, both Hofstra alumni, Class of 1954, established the Libby and Joseph Shapiro Endowed Distinguished Academic Scholarship and the Eva and Benjamin Shapiro Memorial Scholarship at Hofstra University. They created the Joseph and Libby Shapiro Family Foundation, which generously donates to educational, religious, health and civic institutions and organizations.

Mr. Shapiro served as co-chair of Hofstra’s 2004 Hofstra Gala Ball honoring Monsignor Thomas Hartman, which was successful in funding an academic chair in Catholic Studies at Hofstra. Also in 2004 Hofstra dedicated the Libby and Joseph G. Shapiro Alumni House in honor of the Shapiros’ loyalty and generosity to Hofstra. In 2010, Mr. Shapiro was honored at the University’s 14th Annual Gala and presented with the Presidential Medal of Honor. He is a recipient of Hofstra’s Alumni Lifetime Achievement Award and its George M. Estabrook Distinguished Service Award.

Mr. Shapiro served as chairman and CEO of Commander Enterprises, a family-owned real estate investment company. He received his BBA from Hofstra University where he was also a member of Epsilon Sigma fraternity. He served in the United States Army and saw active duty in Korea and has held numerous business and professional affiliations during his career. These have included: Director of Fleet Bank, Director of the Long Island Association, Oil Heat Institute of Long Island, Chairman of the Long Island Heart Council and American Heart Association, former Chairman of the Glen Cove Zoning Board of Appeals, New York State Joint Legislative Committee of Environmental Management of Natural Resources, a board member of the Broward Sheriffs Advisory Council, and a member of the Royal Knights of Chivalry for Cancer Research.

In tribute to the memory of Mr. Shapiro all Hofstra University flags were lowered to half staff.