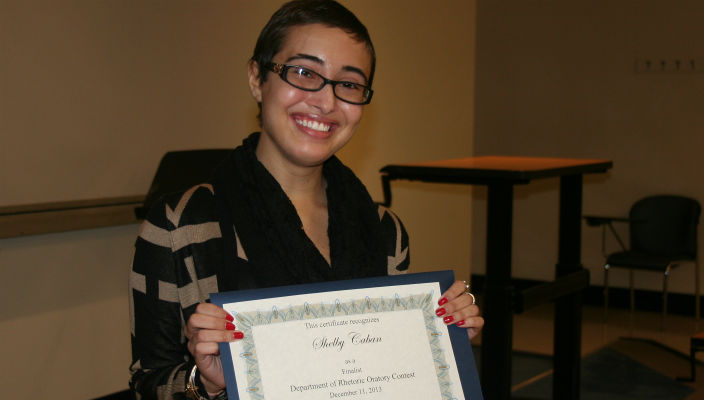 Shelby Caban, a junior psychology/premed student, took first place in the Department of Rhetoric’s  oratory competition today, drawing on her own experiences as a heart transplant recipient to deliver an impassioned plea in favor of organ donation.

In her speech, Caban spoke of being born with a rare heart condition, restrictive cardiomyopathy, which required her to have a heart transplant at age 10.  Only about a quarter of the 250,000 people added yearly to transplant waiting lists ever receive the organ they need, she said.

“Where do you want your organs to be – in an urn on the shelf, six feet underground, or in someone’s body , giving them a second chance at life?” she asked the audience.   She also spoke of her fight against cancer, having been diagnosed with lymphoma in April.  After six months of chemotherapy, her prognosis is good, she says.

The competition, held once a semester, recognizes the top students among the 150 currently taking the Department’s public speaking course, said Philip Dalton, associate professor and department chair.  Twelve students, nominated by their professors and peers, competed in last week’s semifinal round, with six advancing to today’s finals.

Topics ranged from the benefits of exercise to pet adoption to the psychological impact of music.  Oscar Espinal ’15, a rhetorical studies/political science double major with a minor in Spanish, took second place with his speech in favor of the Affordable Care Act.

“Given the quality of all of the presentations, it was difficult to select the winners,” Dalton said.  “The winning presentations had clear points, were well-organized, and were passionately delivered.”  Joining him as judges were Hofstra alumni Gordon Tepper, communications director for the City of Long Beach, NY, and Sid Nathan, a recent candidate for the North Hempstead Town Council.  Caban won a $100 gift card, while Espinal won $50.