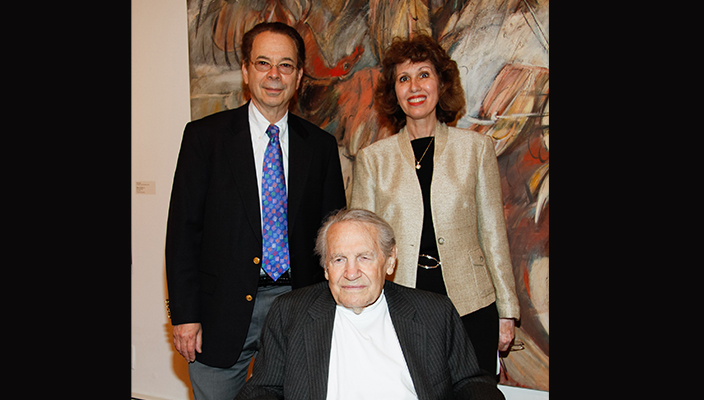 Yonia Fain, professor emeritus of art history and an internationally acclaimed artist and poet, died today. He was 100. Mr. Fain employed powerful visual imagery in his canvases and works on paper to pay tribute to the memories of those lost during the Holocaust.

Born in the Ukraine in 1913, Mr. Fain’s family fled Bolshevik Russia. He outran Nazi troops in Poland, survived the Shanghai Ghetto of World War II, and after the war made his way to Mexico where he was befriended by the Mexican muralist Diego Rivera. Mr. Fain arrived in the U.S. in 1953 and was in a number of Whitney annuals and one-man shows. In 2001, the National Holocaust Museum included his work in the group show Flight and Rescue. He was the author of five books of Yiddish poetry and served as the President of the Yiddish Pen Society.

Mr. Fain served on the faculty of Hofstra University’s Department of Fine Arts, Design and Art History from 1971-1985. In 2012 he attended the opening of the Hofstra University Museum exhibition in his honor, Yonia Fain: Remembrance.