Hofstra Music Professor and Director of Bands, Peter Boonshaft was chosen as conductor of the National High School Honors Band for the convention of the National Association for Music Education (NAfME) on October 30, 2013, in Nashville, TN.  The 162 accomplished high school musicians from throughout the United States who performed in this band are considered to be among the most talented young musicians in the country. Students were required to audition for a spot in the conference All-National Honor Ensembles, which also included an orchestra, mixed chorus and jazz ensemble. 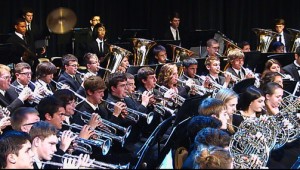 NAfME is among the world’s largest arts education organizations and is the only association that addresses all aspects of music education. Dr. Boonshaft was honored in 2011 by NAfME with the George N. Parks Award for Leadership in Music Education. Michael A. Butera, executive director of NAfME, had said, “The recipient [of the George N. Parks Award] must have a collaborative spirit, dedication to knowing the students as people, perseverance and enthusiasm, and an ability to instill qualities in students beyond the musical.”

Dr. Boonshaft has been invited to speak or conduct in every state in the nation and many countries around the world. He is conductor of the Hofstra University Wind Ensemble and Symphonic Band, professor of conducting and music education.

Active as a proponent of new literature for concert band, he has commissioned and conducted over 40 world premieres by notable composers.  Dr. Boonshaft has been awarded membership in Pi Kappa Lambda and Alpha Chi, as well as twice receiving the University of Hartford Regent’s Award and that University’s Outstanding Music Educator Award.  His honors include being selected three times as a National Endowment for the Arts “Artist in Residence,” three times awarded Honorary Life Membership in the Tri-M Music Honor Society, and being selected for the Center for Scholarly Research and Academic Excellence at Hofstra University.  Sound Innovations, a revolutionary new band and string teaching method book co-written by Boonshaft was honored at the 2010 winter convention of the National Association of Music Merchants.