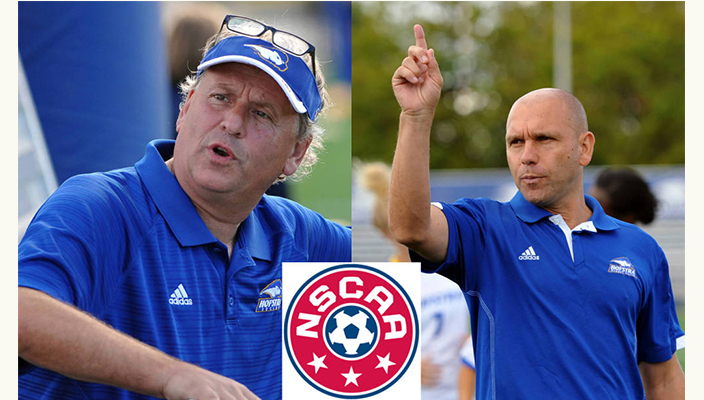 The Hofstra Men’s and Women’s Soccer programs were recognized as 2012-13 College Team Academic Award Winners by the National Soccer Coaches Association of America.

Both teams posted team grade point averages of 3.0 or higher. Hofstra was one of 187 schools to have both the men’s and women’s team earn the award from the NSCAA. The Hofstra Women’s Soccer program posted a 3.67 cumulative grade point average under head coach Simon Riddiough. The Pride Men’s team recorded a 3.17 GPA under head coach Richard Nuttall.

Both programs earned a berth in the 2013 Colonial Athletic Association Tournament. The women’s team went 10-6-3 and advanced to the CAA semifinals. Sophomore Leah Galton was named the league’s Player of the Year and junior Sam Scolarici set a school single-season record with 18 goals. Senior midfielder Tara Kerns was Hofstra’s selection to the All-CAA Academic team.

Nuttall’s team went 8-7-3 and defeated a nationally ranked team with a double-overtime victory over then-No. 25 Brown on Sept. 15. Senior forward Chris Griebsch was named the CAA’s Player of the Year after setting the program’s all-time assist record and finishing with a 2013 stat line of seven goals, eight assists and 22 points. Senior Herbert Biste was Hofstra’s selection to the All-CAA Academic squad at the league’s awards banquet two weeks ago.