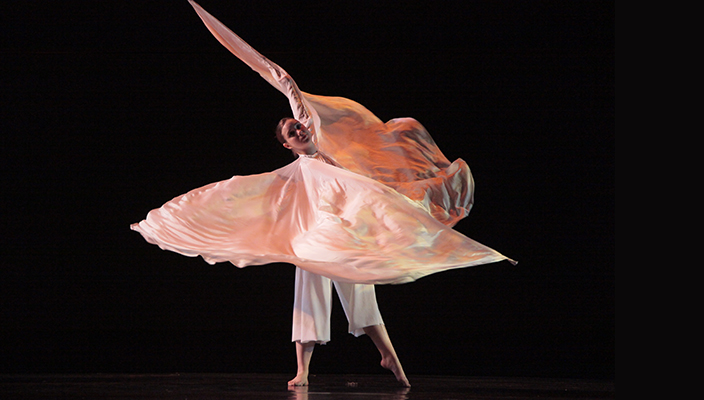 Hip hop, contemporary, tap, Irish step, jazz and ballet … senior dance major Stephanie Grover performs them all, and says her versatility – and the versatility of Hofstra’s program – is a definite strength. Stephanie will be among the dance majors to perform in the annual Fall Faculty Dance Concert, November 21-24, at the John Cranford Adams Playhouse.

Stephanie, who hails from Massachusetts, has been dancing since the age of 3, taking lessons and performing in competitions all the way through high school. Although she originally entered Hofstra planning a dual major in dance and forensic science, she says, “My career goal has always been to be a dancer.” Forensic science eventually became Stephanie’s minor, along with studies in exercise science.

For the Fall Dance Concert Stephanie will perform in “Safe House,” a nine-minute dance by guest choreographer Terry Creach. “It has a post-apocalyptic theme that portrays testing and trusting relationships while building a community,” Stephanie says. The piece came together in an untraditional way. “The first rehearsal was just improv, and then each rehearsal after that was seeing how we could pull material together, work in solo dance pieces and partnering. Even the lighting became part of the story, as the piece starts out with a lit rectangle that opens and closes around the dancers.” The costumes are military in style, some more formal than others. When asked if it helps to have a story accompany a dance, Stephanie says, “It’s very important to have a backstory. Even if there isn’t an official one, it’s up to the dancer to decide what each movement means, so the audience is taken on a journey through the performance.”

In addition to “Safe House” by Terry Creach, there will also be choreography by Stormy Brandenberger, Rachel List, Amy Marshall, Karla Wolfangle and Royce Zachery.

Stephanie’s post-Hofstra plans include moving to Brooklyn and a lot of auditioning. She is currently on waitlist for an apprenticeship with a contemporary dance company in Manhattan. When asked what she has most appreciated about being in Hofstra’s dance program, she says, “The number of opportunities to perform.” In addition to the Dance Concert – her sixth at Hofstra – she has also performed with the student organizations Danceworks, Imani, Rhythmix and Dancers in the Schools. She has also represented the program at the American College Dance Festival and the Kids Café Festival at the Kumble Theater in Brooklyn.

Show times for the Fall Faculty Dance Concert are 8 p.m. Thursday and Friday; 2 and 8 p.m. on Saturday; and 2 p.m. on Sunday. Tickets are $12; $10 for senior citizens (over 65) or matriculated, non-Hofstra students with I.D. Members of the Hofstra community receive two free tickets upon presentation of a current HofstraCard. For tickets and more information call the Hofstra Box Office at (516) 463-6644, Monday through Friday, 11 a.m. to 3:45 p.m.

On Saturday, November 23, from 4-7 p.m. there will be a reception for Hofstra Dance alumni at Emily Lowe Hall, room 108. Stephanie is actually an alumni co-chair for the club MoVoM and is working to reinstate its alumni chapter. For more information on the reception, visit their Facebook page: Hofstra Dance Alumni Reception.