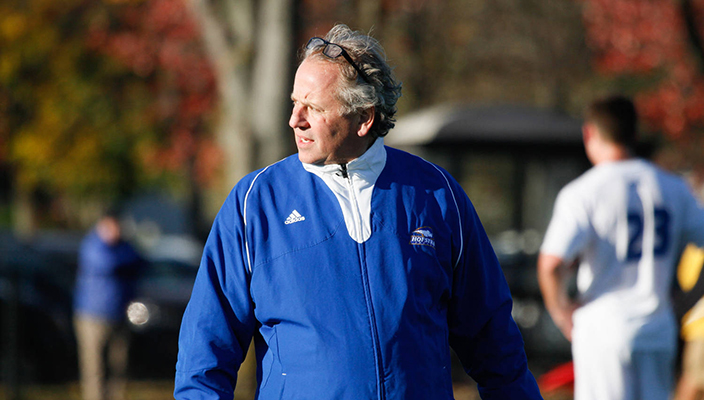 Nuttall will be among the group honored by the LISFL with an induction ceremony on Friday, Nov. 22 at the Floral Terrace in New Hyde Park. The induction will also mark the LISFL’s 65th anniversary. A planned dedication wall is expected to be dedicated at the league’s Hicksville office with each Hall of Famer receiving a plaque with that person’s name and likeness.

Nuttall, who is Hofstra’s winningest all-time coach, just completed his 25th season at the helm in 2013. The Pride went 8-7-3 and qualified for the Colonial Athletic Association Tournament.  He holds a career record of 226-205-54. He has had 16 non-losing seasons and led the Pride to three consecutive CAA titles and NCAA Tournament appearances from 2004-06.

This season, senior forward Chris Griebsch was named the CAA Player of the Year, making him the second Hofstra player to earn that distinction playing for Nuttall (Michael Todd did so in 2006).

As a player, Nuttall was a member of the A.C. Glen Cove squad after arriving from his native South Yorkshire, England. Before coming to the United States, he played for Leeds United and Stoke City of the English Football League.

Among the other inductees in the Hall of Fame class is former Mineola Portuguese star and current New York Cosmos starter Carlos Mendes. Former United States national player Chris Armas is also part of the class. The LISFL Hall of Fame is “intended to recognize efforts on-and-off the field, to note the dedication of the league administrators, to congratulate the club sponsors and coaches and to applaud the gifted athletes,” according to the organization.