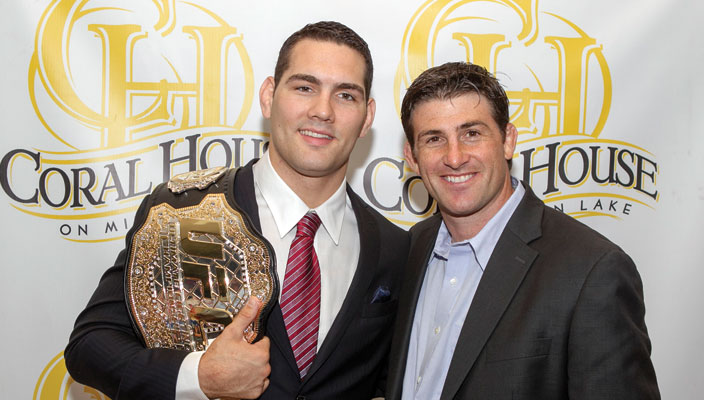 Chris Weidman, a 2007 graduate of Hofstra who compiled a 51-21 record during his two seasons, has made a name for himself in his four years as a professional fighter. The Baldwin, NY, native entered the title fight with a record of 9-0, but had not fought in more than a year due to a torn labrum suffered during training for a previous fight. During this time Weidman and his family had to deal with the effects of Superstorm Sandy, which caused extensive damage to their home. In the weeks following the storm, Weidman and his wife, Marivi, organized a clothing drive at St. Peter’s Church for those in greater need, while tending to the task of fixing their own flood-damaged dwelling.

Yet despite his long layoff and relative inexperience, Weidman’s confidence level was high going into the fight against Silva (33-5), who had won 17 consecutive bouts dating back to 2006. “This has been my goal and I felt it was my time,” he said. But he admitted to a bit of disbelief as the magnitude of his accomplishment sunk in seconds after his knockout win. “When I knocked him out, I said to myself, ‘Are you kidding me?’ It was just a surreal feeling. Then I got really excited. It has been a lot of hard work with some setbacks along the way. But to accomplish your goal after a lot of adversity over the years makes it an even better victory.”

Weidman credited his experience at Hofstra for helping him achieve success as a professional fighter. “Wrestling at Hofstra has been huge for my career,” he said. “I have wrestled nearly all my life, but competing at Hofstra really built on what I had learned previously. The wrestling program made me mentally and physically stronger, and that has obviously played a big role in me being successful in mixed martial arts.”

Another factor that has driven Weidman in his professional career is his status as a four-time All-American (two at Hofstra, two at Nassau Community College). While he is extremely proud of this achievement, he was not satisfied with his performances. “In my mind I should have been a four-time National Champion. I feel that I beat myself at Nationals, and that is what motivated me to step up my game when I got to MMA.”

Since becoming champion on that first Saturday in July, Weidman has been going nonstop. As the new face of UFC and MMA, he had a steady stream of media appearances culminating in having July 17, 2013, declared “Chris Weidman Day” by Nassau County Executive Ed Mangano. Weidman realizes that the relative anonymity of being the challenger is gone now that he is champion, but the married father of two young children hasn’t let his increased popularity interfere with what is truly important to him. “I am looking forward to things slowing down a bit so I can relax and spend time with my family,” Weidman said.

The downtime won’t last long, as a much-anticipated rematch between Weidman and Silva will take place December 28, 2013, in Las Vegas. UFC President Dana White has called the bout “the biggest fight in UFC history.”