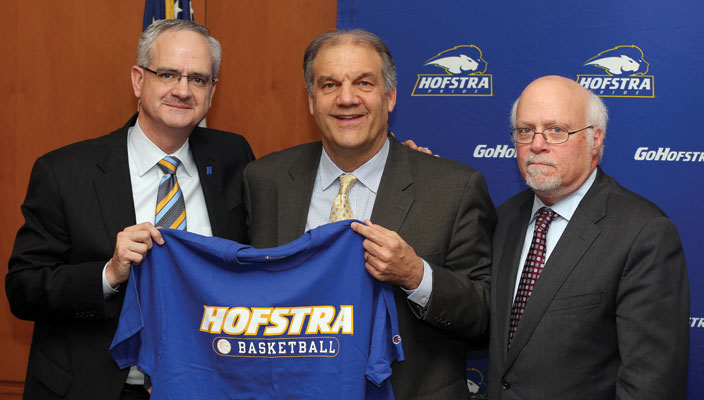 Q:        What has been the reception from the Hofstra community?

A:        “The people have been fantastic. Every time I’ve met someone, they’ve seemed excited about the program and the University, and that makes you feel good. It motivates you. I was pretty sure Hofstra wanted a winner on that basketball court before I came here, and after being around the people here, I know they want that. It makes you want to keep working harder and harder to bring that excitement here.”

Q:        What has impressed you most about Hofstra University?

A:        “I can’t begin to tell you how impressed I have been with the incredible academic opportunities available for students here at Hofstra. It motivates you because everyone knows this is an outstanding academic University and a very special community in so many ways.”

Q:        How has the Hofstra Pride Club helped connect the program with fans, students and alumni?

A:        A daily priority is to include people – talk to them and get them interested in the program. Through the Hofstra Pride Club, we can reach a lot of people who care deeply about the program and provide their generous support. Their support is vital in allowing our program, and the other Hofstra athletic teams, to compete and win at the highest level.

Q:        How important was it to bring in your entire coaching staff?

A:        The continuity is nice, but the most important thing is that they are very good coaches. They are good people, and having that familiarity is a plus. Everything is new; we have eight new players and five returning players who need to get used to a new staff, so having all the coaches on the same page is crucial.

Q:        With Speedy Claxton returning to the program, how do you envision his role?

A:        It’s so exciting to have him around. You say ‘Hofstra Basketball,’ and you might as well say ‘Speedy Claxton.’ He can do so many things and has a wealth of knowledge, which will be of great benefit to our coaching staff.  As just one example, at a team camp, we were just talking about ball screens. As a ball-handler, he talked about what he hated seeing a defense do to guard him. It gets the attention of the players to listen to someone who has that NBA experience. Just his presence will be great for our program.

Q:        You’ve already added seven new players. How important was the roster flexibility to shape the team in the mold that you want?

A:       The fact that it was basically a blank canvas and you could go out and get the guys you needed was good; it was just hard to do it. The timing of the year was tough. We didn’t get here until the middle of April. Reaching out and getting those high-quality guys was difficult, but I’m really excited about the players we have coming in.

Q:        What are your impressions of the returning players?

A:         I’m very proud of them. They’ve been the bedrock on which to build the program. They are high-character and hard-working guys and good basketball players. They bought into the program right away. One of the biggest things coaches have to do is communicate. With these student-athletes, it’s been great to pick their brains. It’s been open dialogue instead of monologues. I want to hear what they have to say, and they’ve shared opinions.

A:        I was talking about it with Speedy, and about coaching in general. We were talking about coaches who get upset. My big thing is, when you get upset, point the finger at yourself first. Could you have taught that better? Do the players understand? Did you rush through it when you explained how to guard against a ball screen, for example? It’s the core of what we do: teach, lead and mentor.

Q:        You graduated with a degree in mathematics. How often do you get to incorporate those skills while coaching?

A:        I use it every possession, because three is more than two and I just love that three-point shot [he said with a laugh]. There’s always geometry involved. Spacing is so important. Phil Jackson used to have the triangle offense. It does come into play.

Q:        What’s been your impression of Hofstra’s athletic facilities?

A:        They are fantastic. In my world, when you talk about what’s a good job, it all starts with who is the athletic director and who is the president. Jeff Hathaway and President Stuart Rabinowitz are terrific. They are at the highest level you can be in their profession. Because of those two people, it’s clear Hofstra wants to win. The facilities are great, and it fits in with what I’ve come to know about the school as a whole. Every time I turn around, I learn something new about Hofstra University.

Q:        What is your approach to scheduling nonconference games?

A:        The way we look at nonconference games can change every year. You have to see what your team needs for that year. If you’ve just won a championship and you have all your starters back, you need to really take it to another level and try and make some national news. Our situation this year is a little different. What we want to do is help our team grow and get better before conference play and give them different experiences in that regard.

Editor’s note: Hofstra’s men’s basketball team opened its season at home on November 8 and was 1-2 in its first week under Joe Mihalich.